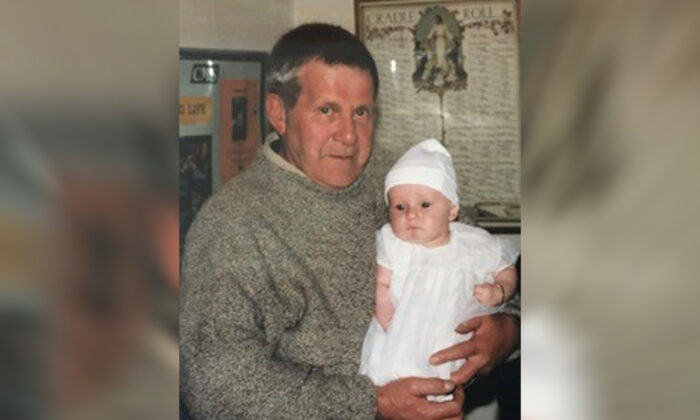 Frank Fishwick who died in hospital on Sept. 11, 2021 after the Army veteran was assaulted outside his home in Preston, England, holding one of grandchildren, in an undated file photo. (Lancashire Police/PA)
UK

Teenager Arrested on Suspicion of Murder of Army Veteran, 86, in Preston

A teenager has been arrested on suspicion of murder after an Army veteran was assaulted outside his home.

Frank Fishwick, 86, who died in hospital on Saturday morning, has been remembered as an “adored father and grandfather” by his family, Lancashire Police said.

Officers who were called to The Paddock in Fulwood, Preston, on Friday at around 3 p.m. found him with a facial injury that was later diagnosed as a fractured nose.

A teenager has been arrested on suspicion of murder after the death of an elderly man in Preston following an assault on Friday.
Anyone with information is asked to call police on 101, quoting log 0879 of September 10, More>https://t.co/uK0XKDTt13 pic.twitter.com/35LFr1w1nW

In a statement, his family described him as “an adored father and grandfather who will be sadly missed by family and friends.”

Fishwick was an Army veteran who served with the Royal Engineers and also committed his working life to Leyland Motors, his family said.

They added: “He was well liked by his friends, offered a helping hand when needed and his humour brought cheer to many.

“Our thanks are extended to Lancashire Police who are working tireless to bring justice to an unforgivable act of violence.”

A 19 year-old man from Preston was arrested on suspicion of murder on Sunday. He is currently in custody.

Police are asking anyone who witnessed the assault or who has any information they think might help to get in contact.