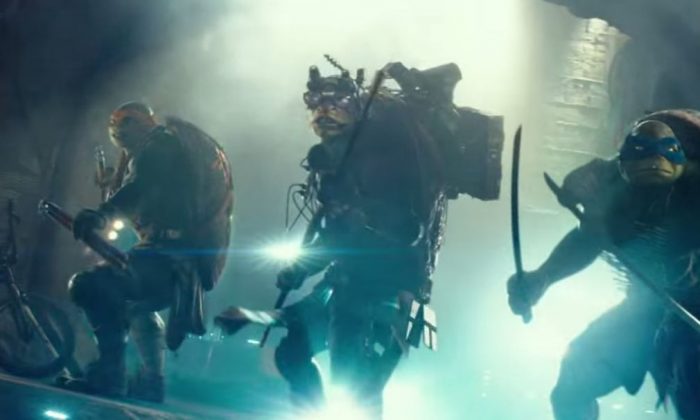 A trailer for the “Teenage Mutant Ninja Turtles” reboot was released this week, showing villain Shredder.

There’s hasn’t been much information disclosed about the movie–including the plot.

William Fichtner, who appears in the film, told ET Online: “We’ve supplied the character of Eric Sachs (aka Shredder) with an awesome time, and with an awful lot of great twists and turns for a guy. But more importantly, I don’t think that any version that I’ve ever seen of the Teenage Mutant Ninja Turtles got you ready for what this one is.”

He continued, “This is a whole new deal. This is a whole new ballgame. These turtles are unlike anything you’ve ever seen. They’re crazy, it’s freaky, it’s live-action, and it’s going to look awesome. I love Jonathan Liebesman, who directed it. I really felt that he got an amazing handle on what it was and what he wanted, and we’ll see. August 8 … can’t wait!”

Will Arnett will also have a major role in the movie, produced by Michael Bay. Johnny Knoxville will lend his voice for one of the turtles.

And Fox will play April O’Neil, the reporter at the center of the series.

“She’s more of a leader when she explores her relationship with the turtles instead of just the human companion that gets dragged along on the adventure,” Fox said. “It’s more representative of a modern woman.”