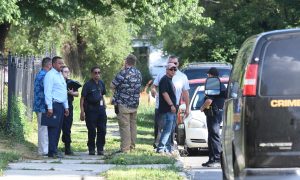 Teenage Girl Dies After Getting Mauled by Pack of Dogs

A teenage girl in Tennessee died in the hospital, where she was rushed after getting mauled by a pack of dogs, a family member said.

Adrieanna O’Shea was attacked by five dogs on Aug. 23 on Crescent Drive in South Knox County. She was rushed to the hospital and remained there until her death.

“It’s hard to believe you’re gone Adrieanna. I am so proud of you for fighting so hard, and I know you were just to tiered to keep fighting! I will never forget your beautiful face, corky sense of humor, and full of so much energy!! You are my birthday twin. And forever I will be wishing you a happy birthday in heaven!! I love you so much! Fly high sweetheart, you’re at peace now!” her aunt, Darlene Schultz-Scott, wrote on Facebook.

According to the teen’s Facebook page, she was studying at Walters State Community College after graduating from Heritage High School in Maryville, where she lived.

According to records obtained by WVLT, when the victim arrived at the University of Tennessee Medical Center, she was covered in mud and blood and her hair was matted. All of her clothes were gone because the dogs had ripped them off.

Deputies said in a report that the five dogs that attacked the girl included two mastiffs, a Rottweiler, a pitbull, and a mastiff/lab mix.

The latter was shot dead by responding deputies while the others fled the area.

Deputies said an electric fence that was not buried into the ground was at the home where the dogs were kept. When deputies told the owners of the dogs that the type of fence wasn’t adequate, one of the owners said the deputy was hostile and shouted: “You shot my dog!”

The owners told WLVT that they didn’t train the dogs to attack and were surprised to learn the pack mauled the girl.

According to the sheriff’s report, though, owners told deputies initially that “the dogs were doing their jobs,” reported WATE. The dogs did not have their rabies vaccinations up to date, one of the owners admitted.

O’Shea had been at the house the night before the attack and forgot her purse there. When she went back to get it the next day, she was mauled, causing her to lose a lot of blood as she suffered bite wounds all over her body. A witness said the victim called one of the dogs by name as she tried to escape.

The dog owners decided to euthanize all of the dogs that survived, one of them told the broadcaster.

No criminal charges have been filed as of yet.

According to the Centers for Disease Control and Prevention, about 20 percent of people who are bitten by a dog require medical attention. The agency notes that any dog can bite people.

“Children are more likely than adults to be bitten by a dog, and when they are, the injuries can be more severe. Over half of dog bite injuries occur at home with dogs that are familiar to us. Having a dog in the household is linked to a higher likelihood of being bitten than not having a dog. As the number of dogs in the home increases, so does the likelihood of being bitten,” the agency stated.

People should always ask if it’s okay to pet a dog before doing so, remain motionless when approached by an unfamiliar dog, and curl into a ball if knocked over by a dog.

Since 2001, the latter have accounted for 37.5 percent of the bites reported in medical literature, while the percentage from mixed breeds and German Shepherds have dropped.