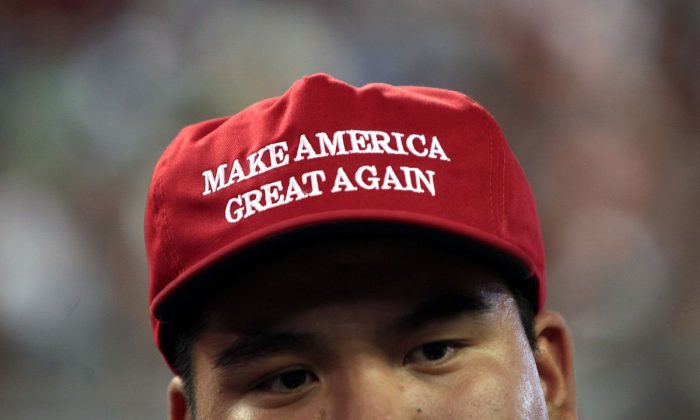 The teen who was assaulted in a Texas restaurant for wearing a “Make America Great Again” hat received a new hat signed by President Donald Trump.

Fox29 San Antonio reporter Joe Galli tweeted a photo of the signed cap that was sent to 16-year-old Hunter Richard.

#Update: Teen who made national news after having #MAGA hat stolen at a San Antonio fast food restaurant just got this in the mail. A hat signed by @realDonaldTrump.

In a now-viral video, a man later identified as Kino Jimenez, 30, is heard saying, “You ain’t supporting [expletive],” as he grabbed the hat and tossed a drink in the direction of the person who was filming the footage. Richard said that he got his original hat returned by police after Jimenez was arrested in Universal City, Texas, WAOI-TV reported.

“This is gonna go great in my [expletive] fireplace,” Jimenez says as he walks away.

President Trump’s son, Donald Trump Jr., tweeted about the incident: “If someone can get me this young man’s information I’ll get him a new #maga hat… SIGNED by #potus!!!”

If someone can get me this young man’s information I’ll get him a new #maga hat… SIGNED by #potus!!! https://t.co/zHBz4gKpkf

Jimenez was detained last Friday on a warrant for theft of person, and he is being held on $5,000 bond. He was booked and released the same day.

Reports indicated that he was fired from his part-time job at a local bar, Rumble, after the video went viral. “We have since terminated this employee, as his actions go against everything that this establishment stands for,” the bar said in a now-deleted Facebook post. “THIS BAR IS A SAFE SPACE FOR EVERYONE! No matter your race, creed, ethnicity, sexual identity, and political stance, you are welcomed here!” The bar has since deleted its Facebook page.