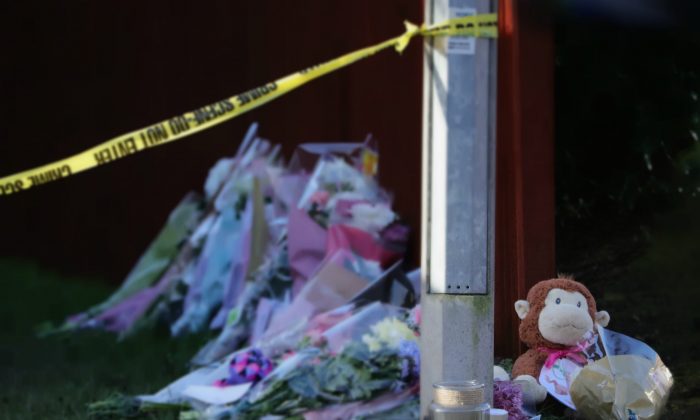 Killer of 7-year-old Katie Rough was sentenced to life in prison in York, England, on Nov. 24. The flowers were laid for the victim near the crime scene. (Christopher Furlong/Getty Images)
UK

A teenager who allegedly smothered a 7-year-old girl before slicing her open to check if she was a robot clutched a teddy bear in court as she was sentenced to life in prison on Friday, Nov. 24, reports The Times.

The female defendant, who cannot be named for legal reasons, pleaded guilty to the manslaughter of Katie Rough and will serve a minimum of five years, said the North Yorkshire Police in a statement issued on Nov. 24.

The convicted teen will be eligible to apply for release in five years, but will be set free only if she can persuade a parole board that she no longer poses a threat, reported the Daily Mail.

#Breaking Girl, 16, who killed seven-year-old Katie Rough in a York park given life sentence for manslaughter and ordered to be detained for a minimum of five years pic.twitter.com/1GfCrUL2Tz

The defendant, who appeared in court by remote video-link with her head down and holding a stuffed toy in her hands, had not spoken at any of the previous hearings.

“The level of danger to the public is high. In the circumstances of your continuing silence, the critical question is whether there is any reliable estimate as to how long that danger will continue,” the presiding judge said during sentencing, according to the Daily Mail.

The teenager did not speak to confirm her identity and her refusal to discuss circumstances around the murder has reportedly been problematic for investigators.

“All the experts are hampered by your silence,” the judge said.

The defendant’s lawyer said that the girl’s refusal to speak was a coping mechanism, according to the BBC.

The judge told the teenager that the specifics of what happened to Katie Rough continue to be “known only to you,” and that “the utter tragedy and devastation of all this needs no emphasis.”

A teenager’s due to be sentenced for the manslaughter of 7 yr old Katie Rough. The 16 year old – who can’t be named for legal reasons – admitted killing Katie on a playing field in the Woodthorpe area of York in January. pic.twitter.com/Xa39EMqneF

Katie Rough was discovered with deep cuts to her neck and chest at a playground in York, England, on Jan. 9, 2017. She did not respond to efforts to revive her. An autopsy revealed she died from being smothered, reports the BBC.

Her killer was found standing nearby, covered in blood and clutching a knife.

The teenager underwent a mental health assessment prior to sentencing, but psychiatrists were unable to agree on a diagnosis. Suppositions range from a depressive disorder to an emerging personality disorder, according to the BBC.

The judge was told the girl had reported delusional thoughts, depression, self-harm, and suicidal thoughts.

According to prosecutors, the defendant expressed the opinion that people “weren’t human and were robots.”

The teenager’s irrational beliefs may have driven her to try to prove that Katie was not a robot, the court was told at a previous hearing, said the Daily Mail.

According to the BBC, an independent inquiry has been launched by the National Health Service to investigate the treatment the defendant had received before the killing.

After sentencing, the police read a statement from the family of Katie Rough, said the BBC.

Excerpts from the statement are as follows:

“Our story is about a loving home and family that was torn apart on a day when we lost our daughter. …

“Our story goes on into a future where our home feels very empty, but we will keep going for sake of our other children and our grandson. …

“We are so grateful for everyone who has helped us in these last months, including the whole community in York, who have been so generous with their kindness, their time and their money. …

“Katie’s memory will live on in our hearts but also more widely, as a little girl who brought more color to her world.”

“This investigation has been one of the most tragic and challenging I have ever dealt with.There are no positive results from cases such as these.”