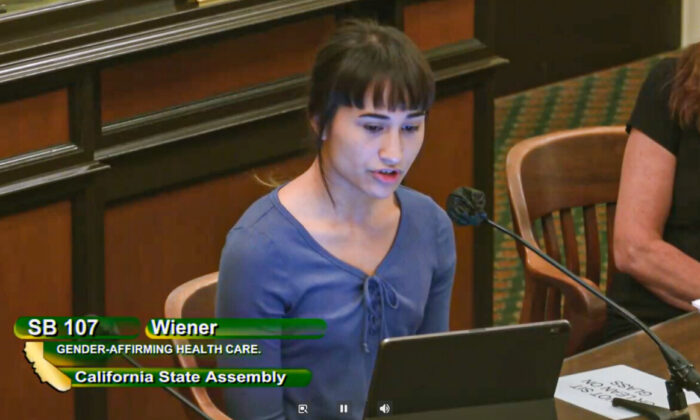 A 17-year-old girl who regrets having both of her breasts removed as a result of so-called gender-affirming care testified during a California Assembly committee hearing on June 28, urging state lawmakers to reject proposed legislation that would make California a transgender sanctuary state.

“I was medically transitioned from ages 13 and 16,” Chloe Cole from the Central Valley told the Public Safety Committee, saying she suffered irreversible consequences from surgeries and hormone treatment.

The committee passed the controversial Senate Bill (SB) 107, which proponents say would “provide refuge” for trans youth, their parents, and those who advocate for and provide “gender-affirming health care” for minors.

The measure would prohibit law enforcement agencies from arresting or extraditing parents charged in other states or nations for child abuse or other crimes related to allowing minor children to receive these medical treatments.

Cole said when she was younger, her parents took her to a therapist who “affirmed my male identity” and “brushed off” concerns about the efficacy of hormones, puberty blockers, and surgeries.

“My parents were given the threat of suicide as a reason to move me forward in my transition,” she said.

Cole said at age 15, she told her therapist she wanted to remove her breasts. She attended a top surgery class with a dozen other girls her age or younger.

“None of us were going to be men, we were fleeing from the uncomfortable feeling of becoming women,” Cole said.

She went through with the surgery, and her endocrinologist put her on puberty blockers and injectable testosterone after two or three appointments.

“Despite having a therapist and attending the top surgery class, I really didn’t understand all the ramifications of any of the medical decisions I was making. I was incapable of understanding, and it was downplayed consistently,” she said. “My parents, on the other hand, were pressured to continue my so-called gender journey with the suicide threat.

“I will never be able to breastfeed a child. I have blood clots in my urine. I am unable to fully empty my bladder. I do not yet know if I am capable of carrying a child to full term. In fact, even the doctors who put me on puberty blockers and testosterone do not know.”

Cole urged the committee to reject the trans sanctuary state legislation and put safeguards in place so that “painful” experiences such as hers aren’t repeated.

Erin Friday, an attorney, argued against the measure, claiming it unconstitutional for California to disrespect the laws of other states.

Friday argued that SB 107 wouldn’t just provide sanctuary for parents fleeing the law in other states, but would make California a refuge for all children who want to access transgender medicine and surgery.

“No questions asked. No real mental health assessment, no minimal diagnosis, and no parental consent. So long as the minor child can get to California, she can order up any type of irreversible treatment,” she said.

Friday, the parent of a teen who once suffered from what’s called Rapid Onset Gender Dysphoria, but no longer identifies as trans, has previously testified that SB 107 would be a big mistake that would only worsen the “largest medical scandal in history” and spread transgender ideology, which she described as a “social contagion.”

State Sen. Scott Wiener, a Democrat, who authored the legislation, said it’s intended to protect families, trans youth, and medical professionals from being prosecuted for child abuse in other states.

For example, Texas is cracking down on the use of puberty blockers, cross-sex hormones on minors, and—in some cases—gender surgery on minors.

“These parents, who are … just trying to do right by their kids and accepting their kids for who they are and supporting them are being told, ‘You’re a criminal for doing that,’” Wiener said. “It’s disgusting; it’s despicable, and California should have no part of that.”

Martin Campos of TransFamily Support Services said the group is currently working with out-of-state residents faced with the decision of whether “to uproot their family and livelihood to seek out refuge in an affirming state such as California” to flee “anti-trans legislation” at home.

“Parents should not be concerned about facing legal ramifications while seeking medically necessary gender-affirming services for their youth. Nor should youth have to endure the trauma that is created by having their parents face those ramifications,” Campos said. “All this bill is seeking to do is allow transgender youth to thrive.”

“I identify as the black trans woman,” Harper said. “I was a trans youth at 13. I grew up in South Central California, and at 13, I was kicked out of my house, which was the story for most transgender people from my era, if you were between the particular intersections of being black and transgender. And I spent many years on the streets, in jail institutions because it was the Dark Ages. Trans folks were considered mentally confused people that could not participate in society.”

In the ’90s, a lot of trans people died because they didn’t get the health cares they needed, but today the transgender community in California is thriving and prospering, Harper said.

“The 13-year-old me thought I was going to end up dead before I hit 21. And here I am advocating in my 40s and still going strong and having the fortitude of support with senators like Scott Wiener, the Lieutenant Governor, and other folks in government,” Harper said.

“I think trans transcends politics. And so you have seen that our community recently has been politicized, which is causing a lot of trauma and pain in our community.”