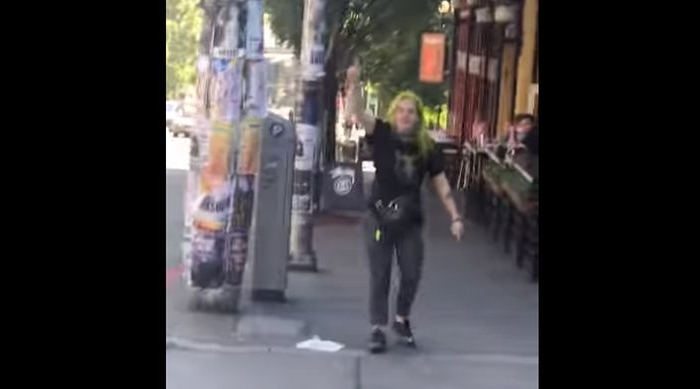 A teen visiting Seattle says he was harassed by a man for wearing a 'MAGA' hat. (Ashton Hess/YouTube)
US News

Teen Says He Was Harassed in Seattle for Wearing MAGA Hat

A teen visiting Seattle said that he was harassed for wearing a red “Make America Great Again” hat.

Ashton Hess, 17, said he was on a summer vacation in Washington state with his family when someone knocked the hat off his head, KIRO reported.

“This guy just runs up and hits me in the head, knocking my hat off … he took off down the street with it, spit on it and threw it in the street, and he turned around and started cursing at me for no reason,” Hess told the station.

The incident was posted on YouTube. Hess said the attack wasn’t provoked.

“Yes, I know what it says,” Hess is heard telling someone in the video after it was knocked to the ground.

Another person yelled: “Get the [expletive] out of this city,” adding: “You’re not welcome here.”

“That’s really necessary. I didn’t do anything to you,” Hess then says in the clip.

What appears to be spit can be seen on the hat when Hess picks it up from the ground.

“I want to expose the left for what they do … We have a First Amendment right to believe in whatever we want, and when that stuff gets out about the left side doing things like that, I do think it hurts them more than it helps them,” Hess said of uploading the clip on YouTube.

Ethan Jackson wrote on Twitter that he was the person who “ripped a MAGA hat off some white kid” in Seattle.

“If you DONT remove MAGA hats on sight ur pretty much complicit,” said Jackson, who said that he doesn’t identify as either male or female.

He was slammed on Twitter by a number of people for his actions. “I’m not on either side it’s childish but just take a second and realize your bashing someone’s freedom because it threatens your freedom,” wrote one person to Jackson.

In Texas earlier this month, a 16-year-old said he was harassed by a man in a Whataburger restaurant. A video uploaded online shows a man grabbing the hat and throwing the drink in the teen’s face. Police then arrested Kino Jimenez, 30, and charged him with theft of a person, a state felony, KSAT reported.