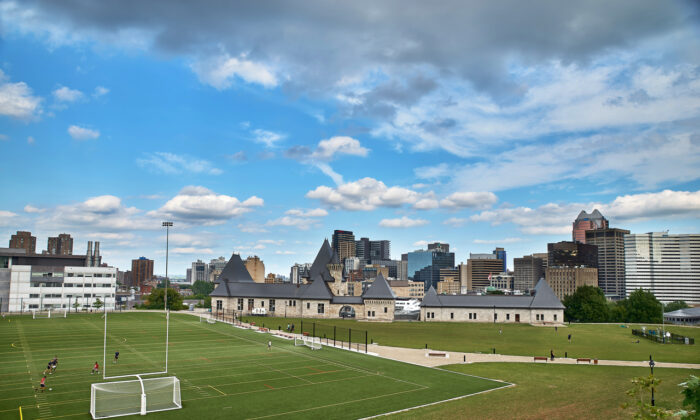 A soccer field with pumping station in Montreal, Que., on Sept. 1, 2018. (Shutterstock)
Canada

An adult spectator is likely facing indefinite suspension from attending youth soccer games after assaulting a young referee during a match between two teenage clubs in Quebec.

The event took place during a May 7 match between Celtix du Haut-Richelieu and Saint-Laurent—two boy’s teams in the U-14 category—in Dollard-Des-Ormeaux, a town southwest of Montreal.

“I am really shocked by such violence. … It is really troubling as an image, it is quite the opposite of what we want to advocate as a message,” Mathieu Chamberland, general manager of Soccer Quebec that oversees the league, told the French-language tabloid Le Journal de Montréal.

“There is no reason, really no reason to justify attacking an official, it’s zero tolerance.”

The attack was caught on camera and shared on social media. The video showed an individual yelling while approaching a 17-year-old assistant referee, who was seen pushing the man when he got too close. The man responded with a punch to the teen’s face.

A spectator intervened by tackling the aggressor and pinning him to the ground. The match was then halted.

The man was reportedly frustrated by a successful equalizer—a goal that makes two teams’ scores equal—but it was the assistant referee’s call for offside that led the man to launch the attack, according to Le Journal de Montréal.

The aggressor has since been identified as the grandfather of one of the players, according to authorities of the Saint-Laurent Soccer Club, who met on May 9 to work out a response to the incident.

“We are going to summon the person fairly quickly before the disciplinary committee, but for the moment, he is suspended indefinitely from attending any games as long as there isn’t any decision taken,” said Guy Hébert, the club’s vice president of communications.

The 17-year-old did not suffer significant injuries from the blow, although he is shaken by the incident, according to Saint-Laurent Director of Referees Robert D’Alesio.

“He will take a break and then he can decide if he wants to continue or not,” D’Alesio told Le Journal de Montréal.

“We see that there is more and more total lack of respect for referees, at the level of parents and spectators, it is problematic,” he said. “It is a case of extreme violence; in my career, it is the worst that I have seen.”

Soccer Quebec said their disciplinary committee is called upon to manage roughly sixty disputes involving the referees each year.

“What we can see, there is a minority of incidents that are increasingly violent, which is worrying,” Chamberland said, adding that a thorough examination of the incident is needed in order to prevent acts of violence in the future.

“Everyone has the right to a healthy environment and safety. Soccer Quebec condemns this event and we will do everything to ensure that this individual can no longer return to the vicinity of the fields.”