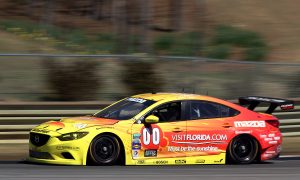 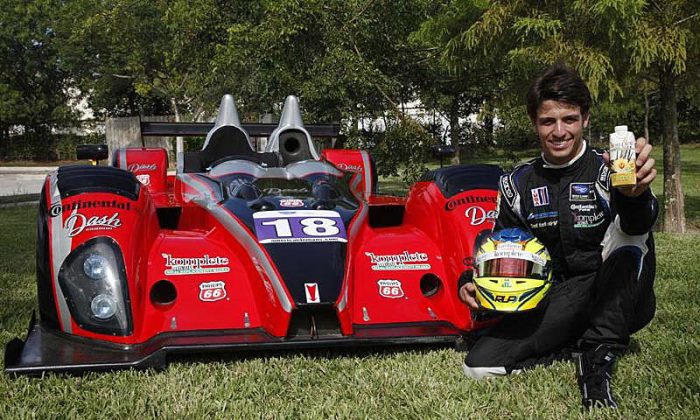 Tristan Nunez with the #18 Performance Tech Oreca in its new livery and a Kate Farms Komplete Shake, ready for Baltimore (tristnanunez.com)
Motorsports

Like any other 17-year-old, Tristan Nunez is excited to have started his senior year of high school. Unlike almost any other teen, he is more excited about having earned his fourth win in the Rolex Sports Car Series, and eager for his first win in the American Le Mans Series Grand Prix of Baltimore this weekend.

Tristan Nunez is a typical teen from Boca Raton Florida, with an atypical amount of driving ability. Since he started racing at age 11, he has been winning his way through the ranks, becoming the youngest driver in the history of the sport to win a national championship in 2012.

When he is not driving in the Rolex Series, Nunez races the #18 Performance Tech Dash Neighborhood/Phillips 66/Komplete Oreca FLM09 in the LMPC class, where he is consistently one of the fastest drivers. He has yet to win a race, mostly due to some unfortunate penalties and strategy issues, but he is always one of the fastest on the track when he is behind the wheel.

He and co-drive Charlie Shearing will be working hard for that first win this Saturday at the Baltimore Grand Prix. Nunez has never raced on this bumpy, twisty two-mile street circuit, but he has prepared well.

“I’m so pumped up for this race,” said Nunez in a press statement. “Last year I was here as a spectator and it will be so awesome to race this track. I was able to get some practice with my teammate Charlie [Shears] this week on the simulator at Race Craft 1 in Indy and we both feel very confident going into this race weekend. The Performance Tech team and our #18 car keeps getting faster and faster throughout the season and I feel that a win is just around the corner for us! Look for the #18 Dash Neighborhood/Phillips 66/Komplete LMPC car to be on the podium!”

Racing is about talent, but it also about finances, so Nunez is also excited to have found a new sponsor, Kate Farms, the creator of Komplete Ultimate Shakes.

Komplete Shakes are vegan, dairy-free, gluten-free and soy-free meal replacement shakes developed by the parents of a child with cerebral palsy who needed easy-to-absorb nutrition. Anyone with a very hectic schedule knows it can be hard to eat healthy on the go, and for people with restricted diets—vegetarians, vegans, or people with food allergies—there no fast readily available alternatives to fast food.

“When we started talking about putting a partnership together, I first had to taste Komplete,” said Nunez. “To be honest, I was really surprised at the taste and have been drinking it for some time now. I’m not big into dairy, let alone breakfast. I also don’t eat too much while at the racetrack so this drink has been the perfect answer; filling me up with good stuff and also keeping it light! I’m honored to represent Komplete moving forward. Just try it and you’ll be hooked too.”

Kate Farms also affords Nunez the ability to go racing. It is a fact of the business that drivers need personal sponsorship to help pay the bills. Nunez is a winner, a rising star, and a great representative for any product. Kate farms saw that, and signed a personal endorsement deal, helping the company get exposure and helping keep Nunez in top-quality cars.

“Tristan Nunez is a phenomenal driver who is lighting up the race car world,” states Richard Laver, CEO and Founder of Kate Farms and also a former tennis professional and the cousin of world famous tennis legend Rod Laver.

“Many things go in to making a great shake and the same for a great driver. Tristan Nunez is a special young driver who is not only a winner on the track but more importantly a winner in life. He understands that giving back responsibly and to be a great role model is just as important as the podium. Kate Farms shares the same winning traits and values and looks forward to partnering with his team for the rest of this year and the upcoming 2014 season.”

The American Le Mans Series Grand Prix of Baltimore starts at 3:45 EDT on Saturday, Aug. 31. Follow it live on ESPN3.com or watch it Sunday at noon on ABC television.

[Note: the author, a vegetarian, knows how hard it is to eat well on the road, but has never tried Komplete Shakes and cannot endorse them.]