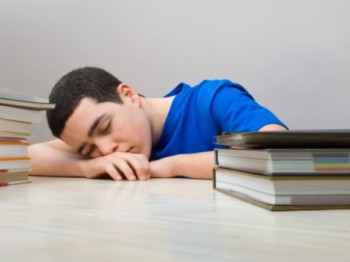 The researchers found that adolescents who sleep seven hours or less on weekdays have higher body mass indexes (BMI) than those who sleep more than seven hours. (Photos.com)
Science

Evelyn So
View profile
Follow
biggersmaller
Print
Adolescents who sleep less than eight hours per night may be more likely to put on weight, according to a new study by researchers in Texas.

A total of 255 high school students were surveyed. The researchers found that adolescents who sleep seven hours or less on weekdays have a higher body mass index (BMI) than those who sleep more than seven hours.

They also found an association between sleeping less than eight hours and obesity in male adolescents.

“Sleep is food for the brain,” researcher Lata Casturi of Baylor College of Medicine Sleep Center said in a press release.

"When teens do not get enough sleep, they fall asleep in class, struggle to concentrate, look and feel stressed, get sick more often, and do not meet their obligations due to tiredness."

Various factors are involved, for example the hormone leptin, which regulates fullness, and the hormone ghrelin, which stimulates appetite.

“When you don’t get enough sleep, it drives leptin levels down, which means you don’t feel as satisfied after you eat," said study co-author Radha Rao, of DeBakey VA Medical Center, in the release. "Lack of sleep also causes ghrelin levels to rise, which means your appetite is stimulated, so you want more food."

“The two combined, can set the stage for overeating, which in turn, may lead to weight gain.”

“Developing good sleep habits in adolescence may help to reduce the risk of related health conditions later in life,” Suhail Raoof, President of the American College of Chest Physicians, said in the release.

The study was presented at CHEST 2011, the 77th annual meeting of the American College of Chest Physicians, held Oct. 22 – 26 in Honolulu Hawaii.