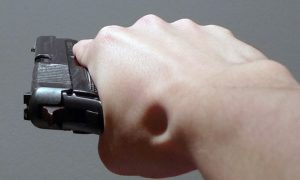 A Georgia teenager killed himself after accidentally shooting and killing his friend hours before ringing in the New Year on Dec. 31.

The Gwinnett County Police Department said a group of teens gathered in a shed in Lawrenceville on Monday when one of them took out a gun and accidentally shot another member of the group, ABC News reported.

Two teens ran, but police said the boy who fired the shot stayed behind and called 911.

One teenager was accidentally shot, and another committed suicide in related tragedies hours before ringing in the new year in Georgia.

Officers discovered one teen dead inside the shed, the report said. Afterward, police “heard a single gunshot while attempting to locate the involved parties from the initial 911 call,” officials said.

“Officers located a male with what appears to be a self-inflicted gunshot wound a short distance from the makeshift shed,” a statement from Gwinnett police read.

Local news outlet WSB-TV reported that the teens were 16 to 18 years old. Their names were not released by officials.

“It appears that a group of four males were gathered in a makeshift shed. At some point, a gun was displayed. The gun was fired and one subject was struck. Then the men then ran from the shed. Two of the friends heard what they described as a pop and found who we believe was the initial shooter, deceased of an apparent self-inflicted gunshot wound,” Ashley Wilson with the Gwinnett Police Department said, elaborating on the incident to WSB-TV.

#BREAKING: @GwinnettPd on the scene of a tragic double shooting in Lawrenceville. We're told two male teens are dead after one accidentally shot another and then took his own life. @FOX5Atlanta pic.twitter.com/NPDpU3nXYs

The shooting occurred at 3:15 p.m. local time along Riverlanding Circle in Lawrenceville, described as an upscale Atlanta suburb.

“You know, it’s New Year’s Eve and to have this happen so close to home, it’s just really devastating,” an unnamed neighbor said. “And now, we’re just in a state of panic to know who these two children are. Are they children of our community where we can reach out to their families? So this was just really unexpected. Nothing like this ever (happened) in this neighborhood,” one neighbor said.

The owner of the property with the shed doesn’t appear to have any connection to the teens, Wilson told the Gwinnett Daily Post.

“The (shed) is kind of a shack that kids hang out in, so we’re kind of like, ‘Oh my God,’” said Riverlanding Circle resident Barrie Hunter, reported the Post. “We’ve lived here for 18 years—this is the first crazy thing (like this) to happen.”

According to another unnamed neighbor, the shed is a local hangout spot. “The kids used to play in it when they were younger,” the resident told the Daily Post. “Now, what goes on—who knows.”

Andrew Tran told WSB that he used to go to the same shed. “I was shocked because just thinking about it, it could have been my friends,” he said.

The two teens’ identities were not released pending notification of their families.

In the United Kingdom, suicide hotline Samaritans can be contacted on 116 123 or one can email jo@samaritans.org.