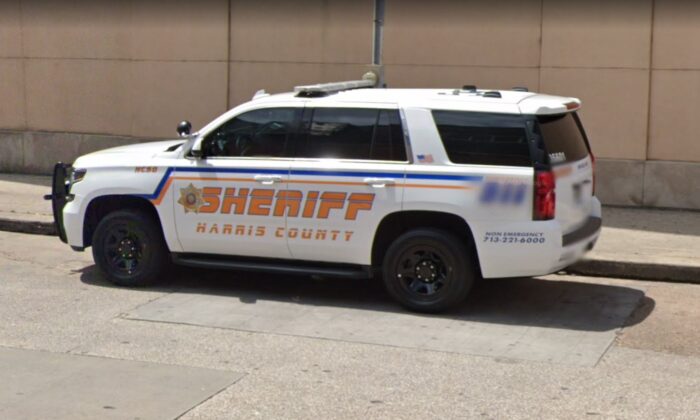 In an unrelated case, a Harris County Sheriff vehicle in Harris County, Texas, in May 2022. (Google Maps/Screenshot via The Epoch Times)
Texas

A teenager in Channelview, Texas, shot and killed two attempted home invaders on Friday with a shotgun, the police said.

Deputies with the Harris County Sheriff’s Office were called to the 16000 block of First Street in Channelview at around 10:40 p.m. on Sept. 9 and found two adult males dead from gunshot wounds.

Investigators determined that those two persons were attempted home invaders and were later killed by a teenage occupant of the property.

There was another suspect who escaped the scene in an unidentified dark-colored 4-door sedan after the shooting, the sheriff’s office said.

All three suspects were armed and wearing masks during the botched home invasion.

No others were injured in the event, police said.

There appeared to be another suspect—besides the three identified by the police—who was involved in the attempted home invasion, according to surveillance footage obtained by ABC 13.

The incident happened when no adult male was home, the Harris County Sheriff’s Office said in a statement.

There was one woman, one 12-year-old male, and two 17-year-old males at home when two suspects were trying to enter the property forcefully.

“One of the 17-year-old male occupants retrieved a shotgun and discharged it several times striking the two victims,” the Sheriff wrote in the “justifiable homicide” record.

This case was sent to the Harris County District Attorney’s Office which decided to present it before a grand jury.

The Epoch Times reached out to the district attorney’s office for comments.

Texas Penal Code allows a person to use deadly force to defend themselves or others, which is commonly known as the “stand your ground” law. It also permits deadly force can be employed to protect property, also known as “castle doctrine.”

According to a national firearms survey (pdf) conducted by Georgetown University professor William English in 2021, about a third of gun owners, 31.1 percent, have used a firearm to defend themselves or their property, often on more than one occasion.

The survey estimates that guns are used defensively by firearms owners in approximately 1.67 million incidents each year.

However, in the vast majority of defensive gun uses, no shots were fired.