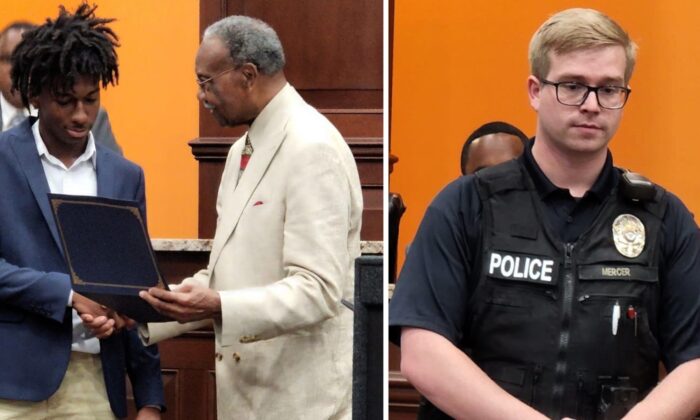 Pascagoula Mayor Billy Knight awards high school student Corion Evans (L) and Officer Gary Mercer (R) with Certificates of Commendation for rescuing three girls when their car plunged into the Pascagoula River in Mississippi and started to sink on July 3, 2022. (Courtesy of the Moss Point Police Department)
Crime and Incidents

Corion Evans, a 16-year-old from Mississippi, has been hailed a hero after he jumped into a river over the weekend to assist a police officer in rescuing three people when a car plunged into the Pascagoula River and started to sink.

The Moss Point Police Department said in a news release that a car occupied by three teenage girls ran into the river in the southern U.S. state on July 3 at about 2:30 a.m. after the driver accidentally drove off the end of a boat launch.

“The driver of the vehicle stated she was following her GPS and did not realize she was going into the water,” said Brandon Ashley, the Moss Point police chief. “The vehicle floated approximately 20 feet and then began to sink.”

Gary Mercer, a local police officer, saw the incident unfold and also swam out to help the stricken girls. The officer attempted to rescue one of the girls to shore but swallowed water while doing so, prompting Evans to assist Mercer and the girl out of the water.

“I see the police officer … He’s drowning,” Evans told local news agency WLOX. “He’s going underwater, drowning, saying, ‘Help!’ So, I went over there. I went and I grabbed the police officer and I’m like swimming him back until I feel myself I can walk.”

Mercer stated that he believes Evans was already in the water helping by the time he arrived.

Evans, a student at Pascagoula High School who has been swimming since he was just 3 years old, was together with one of his friends, Karon Bradley, when they saw the car drive straight into the water.

“Like, only a little bit of the car was still above the water,” Evans told the network, adding that he immediately removed his shoes, shirt, tossed his phone, and jumped in the river.

“I was just like, ‘I can’t let none of these folks die. They need to get out the water,'” he said. “So, I just started getting them. I wasn’t even thinking about nothing else.”

In a joint effort, Evans and Mercer helped the three girls to shore, earning major praise as well as a certificate of commendation.

Evans said the girls were about 25 yards out in the river, so he had to swim quite a distance, explaining that his legs “were so tired after.”

“They was out there throwing up because a lot of water had got inside all of them,” the student told WLOX. “Anything could’ve been in that water, though. But I wasn’t thinking about it.”

Ashley praised the “bravery and selflessness” Evans displayed by risking his own safety to help the girls and police officer in danger.

“If Mr. Evans had not assisted, the situation could have turned out differently, instead of all occupants being rescued safely,” Ashley said in the release, adding that everyone involved is doing well.

Mercer and the three girls were briefly hospitalized after the incident. The officer is expected to back on duty later this week.