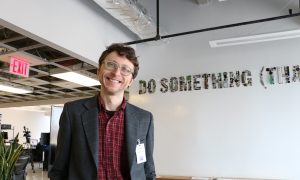 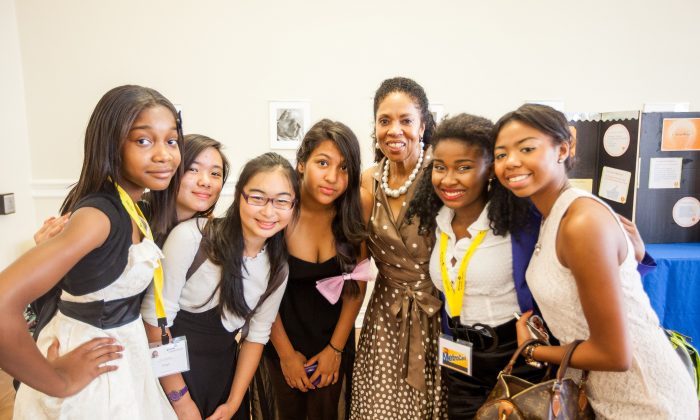 Teen Girls With Ideas Get a Taste of the Business World

NEW YORK—A group of investors were sitting around tables in an august chamber of the Barnard Hall, Columbia University. “Is your product going to be easier to take off?” asked one of them. “It’s definitely something to look into,” responded Mia Bess, pitching a business idea for easily applicable ban-aids.

She and her two partners, Dakota Swann and Giselle Curtis, looked for a $75,000 investment to make their idea fly. An ambitious goal considering their ages range from 13 to 16.

Over the past two weeks 50 girls between 13 and 16 received step-by-step lessons on how to cultivate an idea into a product, then into a business.

The goal is for them to gain confidence in being a leader, the most lacking ingredient to women’s success, according to Barbara Murphy-Warrington, chief executive officer of the Girl Scouts of Greater New York, a renown non-profit serving 28,000 girls in the urban area.

Murphy-Warrington found that the majority of girls don’t feel up to a leadership, but not necessarily because of a lack of skill.

Although holding over half of the nation’s professional-level jobs, women are less than 15 percent of executive officers, according to the Center for American Progress.

The Girl Scouts came to Barnard College three years ago looking for solutions to the problem and were given an idea: One great way to learn leadership is through entrepreneurship.

And so the Girl Scout Leadership Institute was born. Entering its second year, it teaches about leadership in the world, workplace, and community. At the onset of the 15-month program the girls come up with product ideas and then undergo a two-week intensive training on how to turn them into profitable businesses. The ideas also have to be helpful to the society.

On Thursday, the participants pitched their ideas to a panel of distinguished businesswomen, such as Felita Harris, senior vice president at Donna Karan International; or Jeanne Sullivan, co-founder of the StarVest Partners investment firm.

Although the panelists don’t actually pledge investments, they ask questions, provide feedback, even ideas on how to improve or market the products.

“What I saw was young people lighting up their brain and realizing that from a blank piece of paper they could potentially build a business,” said Sullivan, a 25-year veteran of tech investment.

Dakota Swann, 13, already saw herself as a leader, organizing activities at her school before. She thought the program would be a piece of cake. But “it was not easy at all,” she said. “It taught me a lesson [that] it’s not about you. It’s about everyone in your group too.”

For Mia Bess, 16, the most important take-way were all the nuts and bolts of how to create a successful business. “They really held our hand through this whole thing,” she said. “So now, if they gave it to us again, we know how to do it exactly.”

The program is hard to get in though. All it takes to apply is a $15 year-long Girl Scouts membership, but only 50 are chosen, based on school grades, community engagement, and an essay explaining commitment to the program and the Girl Scouts ideals of courage, confidence, and character.

Murphy-Warrington said she would love to bring in more girls, but the program costs $6,000 to $8,000 for each, a figure hard to attain by cookie sales. JPMorgan Chase, the Ford Foundation, and the New York Community Trust are among the sponsors.

As two thirds of Girl Scouts members are from low-income families, the girls are receiving stipends so all of them would be able to participate. For the two-week training they bring home $800.

Though only a training, the program was not just make-believe. Some chosen ideas will receive seed funding from the Girl Scouts and several of the young ladies expressed an intention to pursue their ideas further. One of the ideas was even discouraged from detailed description, as the author plans to patent it.

“I think, as adults, we underestimate the imagination and creativity and the potential for generating ideas that offer solutions to society’s problems in this generation,” Murphy-Warrington said.