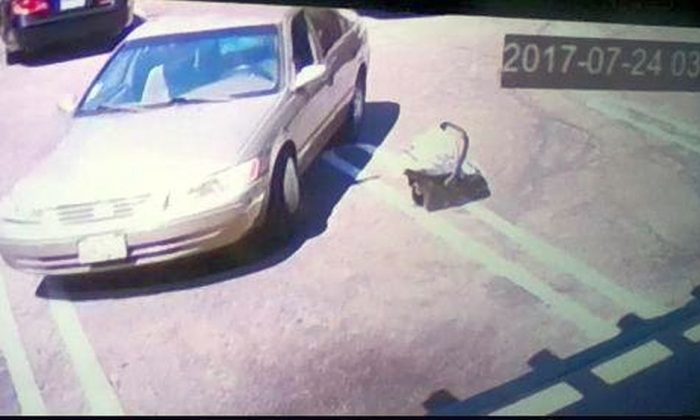 An image from a security camera shows a car leaving as an abandoned baby remains in a car seat outside in Suisun City. (Suisun City Police Department)
Crime and Incidents

An infant is in critical but stable condition after his 18-year-old father abandoned him at a Northern California strip-mall parking lot in Suisun City, according to police on Tuesday.

Daniel Mitchell, the father, drove into the lot with the 16-day-old child and put it on the ground before leaving, police said. They reviewed surveillance video and interviewed witnesses before finding Mitchell, according to a statement posted on Facebook by the Suisun City Police Department.

An image from a security camera shows a car leaving as the abandoned baby remains in a car seat outside in Suisun City.

Two employees noticed the child in the unattended child seat. They then called the police, who were able to get the license plate from surveillance footage.

Mitchell was then involved in a hit-and-run crash and was hospitalized in Fairfield.

He was arrested on child endangerment, child abandonment, and committing a felony while free on bail. He also faces a misdemeanor possession of suspected cocaine charge.

“There was this guy who abandoned an infant outside, and just left,” said Kay Grewal, manager of the Mega Smoke Shop, near where the baby was found, as reported by the Fairfield Daily Republic newspaper. “A couple of guys brought the baby inside. We called the cops and got (the video),” Grewal said.

Anyone with information regarding the case is encouraged to contact Detective Sousa at (707) 421-7361. Information can also be reported anonymously to Solano Crime Stoppers at (707) 644-7867.