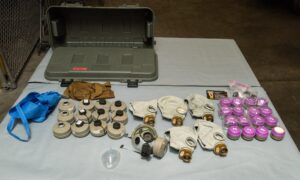 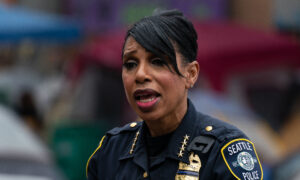 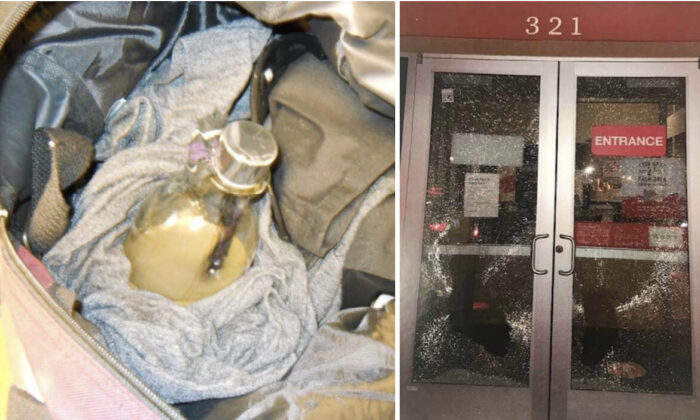 (L) Photo of a flammable device commonly known as a Molotov cocktail found in the bag of a 19-year-old teen Sami Horner. (R) Smashed windows of a bank that Seattle Police officers observed Horner smashing, in Seattle, Washington, on late Aug. 26, 2020.
Crime and Incidents

A 19-year-old man from Tacoma, Washington has been charged with “unlawful possession of a destructive device” after a Molotov Cocktail was found in his backpack at a protest on Seattle’s Capitol Hill that turned violent.

Sami Horner appeared in the Seattle district court on Aug. 28. Horner was arrested late on Aug. 26 in Seattle.

“In his backpack law enforcement found a glass bottle with a wick, filled with flammable material,” the U.S. Attorney’s Office for the Western District of Washington stated in a release. “Horner also carried two lighters, a helmet, a mask with filters, and a walkie-talkie.”

“The glass bottle, more commonly referred to as a Molotov Cocktail, fits the legal definition of an incendiary device.”

According to the criminal complaint (pdf), the teen was identified in a group that first gathered at Volunteer Park on Seattle’s Capitol Hill.

Officers from the Seattle Police Department saw Horner smashing multiple windows at a bank branch at 321 15th Avenue East. The damage is estimated to be more than $1,000, the criminal complaint stated.

Horner ran away after the officers tried to arrest him, but was chased down and ultimately arrested about three blocks away from the bank.

“Upon being detained, Horner blurted out, without any prompting, that the backpack was not his, that his wallet was in it, and that he was holding it for a friend,” the complaint stated.

Later when officers were confirming his identity, Horner said, “I said to check my ID, I said that my ID was in my bag, err not my bag, but somebody else’s.” The complaint noted that the comment was recorded on body camera video.

When officers checked the content of the backpack, they found a glass bottle that contained liquid inside.

“The liquid tested positive for a chemical in the flammable liquid family,” the complaint said.

Brendan Phillips, an officer from the Bureau of Alcohol, Tobacco, Firearms, and Explosives (ATF) said that the Molotov cocktail would be properly identified as an incendiary bomb.

If convicted for unlawful possession of an improvised explosive device, Horner could spend up to 10 years in prison and face a fine of up to $250,000.

Protests have flared across the United States since the end of May, when George Floyd died in police custody in Minneapolis, Minnesota. While protests in many instances have been peaceful, many have also turned violent. Americans across the nation have seen their businesses destroyed, looted, and set on fire by anarchists and rioters.