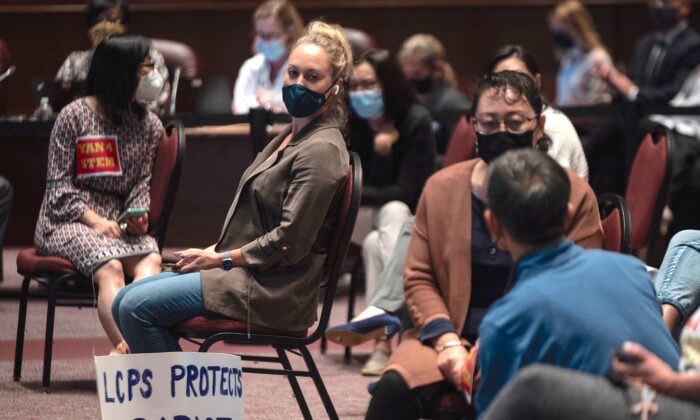 A woman sits with her sign during a Loudoun County Public Schools (LCPS) board meeting in Ashburn, Virginia on Oct. 12, 2021. (ANDREW CABALLERO-REYNOLDS/AFP via Getty Images)
Regional & Local News

'I want him to become better in the future instead of sitting in jail for the rest of his life, but I also want him marked as a sexual predator,' victim's father says
By Terri Wu

LOUDOUN COUNTY, Va.—The teenage boy responsible for two sexual assault cases in Loudoun County schools on Jan. 12 was sentenced to probation at a residential treatment facility until his 18th birthday in July 2024.

Judge Pamela L. Brooks of the Loudoun County Juvenile Court also ordered him to be placed on the sex offender registry, a rare outcome for juveniles and a first for Brooks.

The 15-year-old will stay in the Loudoun County Juvenile Detention Center until his transfer to the locked residential facility, likely within the next week, according to the judge.

On Nov. 15, he pleaded no contest to felony abduction and misdemeanor sexual battery charges for another case in a Broad Run High School classroom on Oct. 6.

“I felt relieved. I felt relieved that we got the ruling that is just,” Jessica Smith, mother of the victim in the May assault, said with a bittersweet smile to The Epoch Times.

Her 15-year-old daughter, the victim, echoed the sentiment. “I felt relieved that we got justice for both the other victim and me and that he’s going to serve his time.”

Visibly upset and with tears in her eyes, the defendant’s mother told The Epoch Times after the court ruling that placing the teenage boy on the sex offender registry was a move that adults made for political gain at the expense of her son’s future.

The registry placement was not included in probation officer Jason Bickmore’s recommendation but requested by Deputy Commonwealth’s Attorney Barry Zweig. The defense attorney unsuccessfully argued that the placement would work against the rehabilitation and betterment goal of the juvenile residential treatment program by leaving a “lifetime” impact on the boy.

The case has drawn controversy in the county over how it was handled by administrators. Loudoun County Public Schools (LCPS) Superintendent Scott Ziegler, in particular, has been harshly criticized for allowing the boy to switch to another public school after the May assault.

The assaults occurred before and after the county adopted a transgender-friendly policy that would allow boys who self-identify as girls to use girls’ bathrooms.

At a school board meeting on June 22, Ziegler denied the existence of any school bathroom assaults, which some parents feared would be the result of adopting such a policy. However, emails later made public revealed that he and the school board, at the time of the meeting, were aware of the May 28 assault.

In response to a public outcry over an alleged cover-up, Ziegler hired a law firm to conduct an “independent review” of LCPS’ handling of the two sexual assault cases.

Before announcing her ruling, Judge Brooks said that she had dealt with many juvenile sex offenses, crimes more common than the public realized. She added that she had read many psychosexual and psychological evaluations, but the defendant’s report “scared” her.

“Yours scared me for yourself, your family, and society in general,” Judge Brooks spoke to the defendant, adding, “Young man, you need a lot of help.” She said even though his attorney argued that the May 28 incident was “consensual,” the court had ruled otherwise.

She told him, “When someone says ‘yes’ one day, it doesn’t mean they say ‘yes’ every day. ‘No’ means no. You exhibited predatory behavior.” She said she had never put any juvenile on the sex offender registry but would rule so today.

Plaintiff attorney Elizabeth Lancaster said the placement on the sex offender registry was for the protection of the community, not for punishing the boy. According to her, a person on the registry cannot work as a school teacher or at a daycare, and his activities around children will be limited. In addition, a sex offender may face difficulties finding certain jobs; that’s up to the employer’s assessment.

Scott Smith, father of the victim in the earlier assault, said the boy “committed a heinous violent sodomy” to his daughter. “I want him to become better in the future instead of sitting in jail for the rest of his life, but I also want him marked as a sexual predator,” he told The Epoch Times.

‘Do The Right Thing’

The victim impact statements during the hearing made a visual impact on the teenage boy. He cried, shoulders shaking, when Scott Smith spoke directly to him: “You could change. You are young. I don’t believe you are a monster. I thought you looked like a monster, but you really don’t.”

Smith added that he was placed in a residential treatment center at about the same age and spent two years there. He later explained to The Epoch Times that it was due to destructive behavior resulting from a short temper and substance abuse.

“Do the right thing, man. I can see in your eyes; you know you did wrong,” Smith told the teenager.

Speaking of the economic and emotional toll suffered by their family, the Smiths said it was “immeasurable.” Their daughter is “managing her days day by day, hour by hour,” according to the mother. In addition, the couple had to spend so much time on legal matters that they didn’t have time to do their family plumbing business. Scott Smith also said that their business lost customers because his family was accused of lying about the rape, and these customers “chose not to call us.”

Both families said the sexual assault would have a long-lasting impact on the victims, who had been taking therapy sessions. But the families unanimously advocated for a residential placement for the boy to rehabilitate and become a better person.

Later, the boy said he didn’t know how much hurt he had caused until he heard the victim testimonies. “I sincerely apologize to the court, families, victims, you, and you,” he said while turning to the two victim families in the room.

For Smith’s daughter, the first victim to give her impact statement at the hearing, the moment the boy started crying was impactful. “I felt like he finally understood what the other victim and I went through,” she told The Epoch Times afterward.

On Jan. 10, in response to the Freedom of Information Act request by Fight for Schools, a local advocacy group, LCPS confirmed that the review by law firm, Blankingship & Keith, P.C., was complete and withheld its entirety under attorney-client privilege.

“You cannot have it both ways,” said Ian Prior, executive director of Fight for Schools, at the Loudoun County school board meeting on Jan. 11, referring to having an independent investigation and attorney-client privilege at the same time.

“If it is an independent investigation, the attorney-client privilege does not attach, and it can be provided to the public with proper redactions,” he said, urging LCPS to release the report. In response to Epoch Times’ inquiry, LCPS Public Information Officer Wayde Byard resent the same statement on Jan. 13 that the report was complete and withheld.

In November, incoming Virginia Attorney General Jason Miyares said he planned to investigate LCPS, including the on-campus sexual assaults. In addition, he would develop new legislation granting his office the power to intervene in the event of inadequacies by prosecutors.