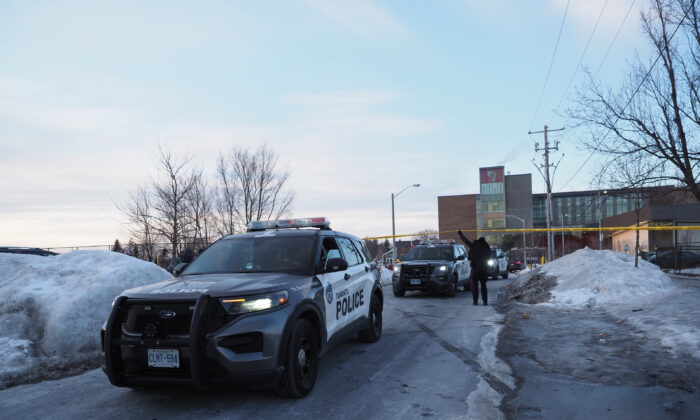 Police leave the scene at David and Mary Thomson Collegiate in Scarborough, where an 18-year-old male high school student was killed just after 3pm, in Toronto, on Feb. 14, 2022. (The Canadian Press/Arlyn Mcadorey­)
Canada

A 14-year-old boy is facing first-degree murder charges after shooting and killing a student in a Toronto high school, city police said on Feb. 15.

The Toronto Police Service said in a statement they responded to calls of a shooting at David and Mary Thomson Collegiate Institute in eastern Toronto shortly after 3 p.m. on Feb. 14.

The police said a 14-year-old boy approached and shot 18-year-old Jahiem Robinson from behind on Feb. 14. The victim died at the scene.

The boy fled the area while chasing and pointing a gun at another 18-year-old student although he did not fire the gun.

The police arrested the teen at 6:54 p.m. the same day and he now faces charges of one count of first-degree murder and one count of attempted murder. He was scheduled to appear virtually in a Toronto court on the morning of Feb. 15.

The Toronto Police Service is holding a press conference to provide an update on the issue at 3 p.m. on Feb. 15.

The Toronto District School Board (TDSB) said in a statement on Feb. 14 that they will continue to assist the police investigation into the shooting, and will also launch their own probe into the tragic incident.

“An incident like this raises questions about how something like this can happen inside a school. As we continue to assist Toronto Police with their investigation in any way we can, we will also undertake our own investigation,” said Colleen Russell-Rawlins, the director of education at TDSB.

As it is considered to be a crime scene, the high school is closed. In a statement, the school said support is available for students from TDSB social workers, psychology staff, and Caring and Safe Schools staff at McGregor Community Centre as of the morning of Feb. 15. Counselling is also available virtually.

“When we return to in-person learning, this support and counselling will also be available at our school and will remain for as long as needed,” the school said.

The school said it will also provide a space “where students can have time to reflect and remember their peer and receive support.”

Toronto’s mayor, John Tory, condemned the shooting on social media, saying that any act of violence taking place in a school is “tragic and unacceptable.”

Any act of violence which takes place in a school is both tragic and unacceptable. My thoughts are with the family and friends of the victim and the students and staff at David and Mary Thomson Collegiate Institute. pic.twitter.com/AtW67GmMUE

In reaction to the news of the shooting, Chris Glover, MPP for Spadina Fort-York, called on governments to address the root causes of gun violence.

“Supporting those who lost a loved one and catching those responsible are the first priorities,” Glover said on Twitter on Feb. 15.

“Then we need governments to provide the opportunities so there isn’t another generation of youth picking up guns.”