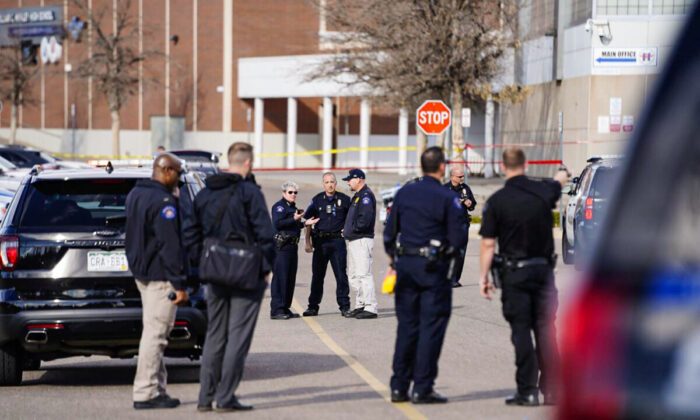 Law enforcement officers respond after a shooting in the parking lot of Hinkley High School in Aurora, Colo., on Nov. 19, 2021. (Philip B. Poston/Sentinel Colorado via AP)
Crime and Incidents

A shooting at the parking lot of Hinkley High School (HHS) in the Denver, Colorado suburb of Aurora left three students injured, police said on Friday.

The Aurora Police Department confirmed in its latest update that a 16-year-old male suspect was arrested in connection with the shooting and has been charged with attempted murder. His name will not be released.

According to a preliminary investigation, a fight erupted at the parking lot during lunch hour on Friday, leading to the shooting. Police have identified the three victims as a 16-year-old male of the Aurora Public School (APS) and two 17-year-olds, a male and a female, of HHS.

“Shortly after this fight, a white pickup truck, occupied by several people, drove through the school parking lot and began firing shots,” the department said in a press release. Authorities have located one of two cars involved in the shooting.

“The Aurora Public Schools Security Officer working at the school fired his weapon but it is unknown if anyone was struck. After firing his weapon, the APS Security Officer heroically applied a tourniquet to an injured student in the parking lot. There were numerous shell casings, of different calibers, that were found on the scene,” it said.

Two of those shot were transported to a hospital for treatment, while the third victim managed to get to a hospital on his/her own, police said. All the victims are expected to survive.

The shooting at HHS immediately prompted officials to place the high school under lockdown, according to a police statement on social media.

Detectives will be reviewing surveillance footage of the incident to determine if there are other shooters involved. There are currently, besides the 16-year-old’s arrest, also two people detained for questioning in relation to the shooting. Police believe there could be even more people involved.

Friday’s shooting followed another incident on Monday in which six students from Aurora Central High School were the victims of bullets fired from at least one car driving by. Detectives are working to determine if the two shootings were related.

Police have not arrested anyone yet in the Nov. 15 shootings. The two schools are 3 miles apart.

Yellow crime tape surrounded the parking lot and anxious parents waited outside the campus to be reunited with their children.

As students were allowed out of the building, television images showed them walking calmly and hugging parents.

“Our community rightly is demanding an end to this violence, and we will stand with them in using every tool we have to prosecute aggressively anyone connected to these attacks on students,” said 18th Judicial District Attorney John Kellner.