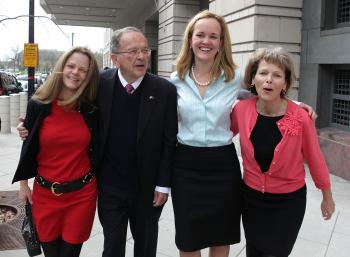 Cheryl Wu
View profile
Follow
biggersmaller
Print
Ted Stevens, a former longtime Alaska Senator, is believed to have been on an aircraft that crashed near Dillingham, Alaska around 8 p.m. Monday evening, according to the National Transportation Safety Board (NTSB).

According to the NTSB, five people on board perished in the accident, while four survived.

NTSB Investigators were dispatched to the Southwest Alaskan town by to assess the post-crash situation.

It is unclear if the 86-year old Stevens, the longest-serving Republican Senator in US history, was one of those casualties, the Anchorage Daily News reported.

Former NASA Administrator Sean O'Keefe was reported to also have been on board the downed aircraft and is unclear whether or not he survived.

Stevens and those on the aircraft were believed to traveling to Agulowak Lodge near Lake Aleknagik, the Daily News said.

Dillingham is a small town located in the rugged mountainous wilderness of southwest Alaska, several hundred miles away from Anchorage. Around the area, flying small aircraft can be dangerous due to the high mountain peaks and sometimes unpredictable weather.

"They're not out there alone right now. There's people that are providing support," Alaska Air National Guard Maj. Guy Hayes told the Daily News. "From what I'm told, there are survivors on this aircraft."

In office as senator of Alaska from 1968 to 2009, Stevens is the seventh longest-serving senator in American history.