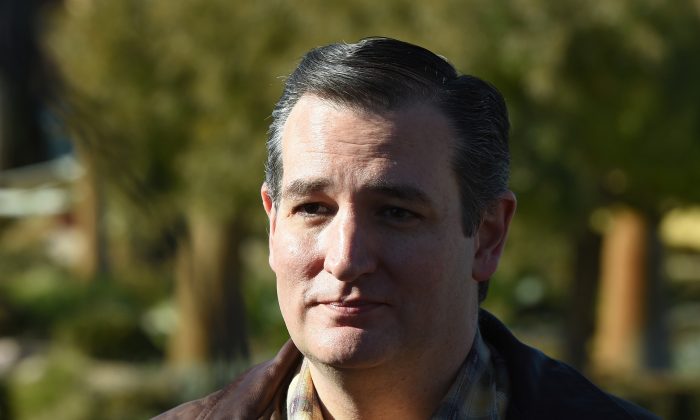 At a campaign event at a gun range in New Hampshire on Tuesday, Republican presidential candidate Sen. Ted Cruz got interrupted by two hecklers who got on stage.

WATCH: @tedcruz handles hecklers at New Hampshire gun event: “The Bernistas are out in force!” https://t.co/RbHcc2tax9

“What made everyone so weird and sad that they had to come out here?” the heckler asked him. “It’s just weird, why is everyone so excited about guns? They kill people.”

Cruz responded, “Sir, who are you and what are you doing here?”

He then asked him, “Are you a bit confused?”

The senator then said he’s welcome to be in the crowd but not on the stage. “Son, thank you, this is not your stage,” he said.

Later, another man got on the stage. “This is not your stage,” Cruz said a few times.

“Boy, it’s almost like the Bernie Sanders guys are scared!” he said to the crowd. “The Bernistas are out in force!” Cruz said.

Cruz then asked: “Did he not get the memo, ‘Live Free or Die?'” That’s the official state motto of New Hampshire, which comes from written by General John Stark, a New Hampshire soldier, in 1809. “Live free or die: Death is not the worst of evils,” he wrote in a letter.