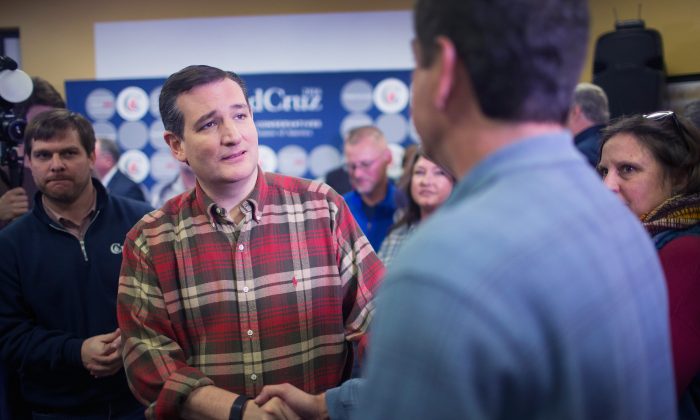 Ted Cruz Is Not Eligible to Be President: Constitutional Professor

A constitutional law professor says Ted Cruz, one of the top Republican presidential candidates, is not actually eligible to take office even if he won.

Mary Brigid McManamon, professor at Widener University’s Delaware Law School, said that Cruz “is not a natural-born citizen and therefore is not eligible to be president or vice president of the United States..”

She pointed to the part of the Constitution that says: “No person except a natural born Citizen . . . shall be eligible to the Office of President.”

She noted that Cruz is a U.S. citizen despite being born in Canada because his mother is an American and a statute from Congress provides for the naturalization of children born abroad to citizens.

But just because he’s a citizen doesn’t mean he can be president, she added.

“Article II of the Constitution expressly adopts the legal status of the natural-born citizen and requires that a president possess that status. However we feel about allowing naturalized immigrants to reach for the stars, the Constitution must be amended before one of them can attain the office of president. Congress simply does not have the power to convert someone born outside the United States into a natural-born citizen,” McManamon wrote in the Washington Post.

“Let me be clear: I am not a so-called birther. I am a legal historian. President Obama is without question eligible for the office he serves. The distinction between the president and Cruz is simple: The president was born within the United States, and the senator was born outside of it. That is a distinction with a difference.”

Not everyone agrees. Solicitors Neal Katyal and Paul Clement recently wrote in the Harvard Law Review that “We agree on one important principle: voters should be able to choose from all constitutionally eligible candidates, free from spurious arguments that a U.S. citizen at birth is somehow not constitutionally eligible to serve as President simply because he was delivered at a hospital abroad.”