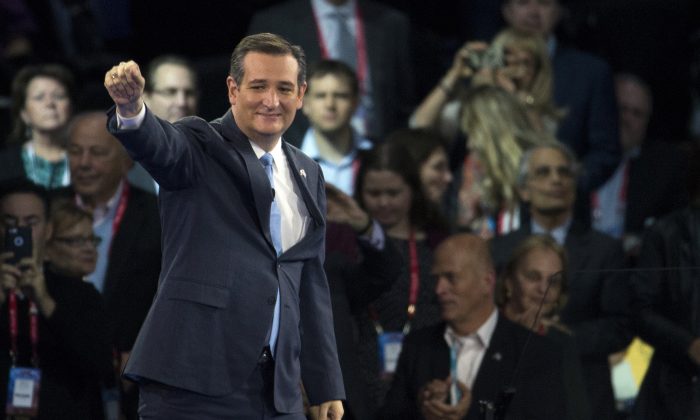 Ahead of Wisconsin’s April 5 primary, Gov. Scott Walker, who dropped out of the race last fall, declared that only Cruz can catch Trump as time runs short in the primary season. And former Florida Gov. Jeb Bush gave Cruz his endorsement — a step perhaps designed to hurt Trump more than help the unpopular Texas senator.

“For the sake of our party and country, we must move to overcome the divisiveness and vulgarity Donald Trump has brought into the political arena,” said Bush, who was knocked out of the 2016 contest last month. “To win, Republicans need to make this election about proposing solutions to the many challenges we face, and I believe that we should vote for Ted as he will do just that.”

Indeed, as Democrat Hillary Clinton addressed rising national security concerns, the Republican contest was hit again by personal insults — this time involving the candidates’ families. Cruz slammed Trump during an appearance in the front-runner’s hometown for making a vague threat on Twitter the night before to “spill the beans” on Cruz’s wife.

“Gutter politics,” Cruz said. Trump’s warning that he would disclose something about Heidi Cruz came in response to an ad by an outside political group that featured a provocative photo of Trump’s wife, Melania, when she was a model and before they were married. Trump misidentified the Cruz campaign as the source of the ad.

Heidi Cruz addressed the situation directly during an appearance outside Milwaukee. “The things that Donald Trump says are not based in reality,” she said.

The Republican infighting came the day after Cruz scored a win in Utah and Trump claimed Arizona. Despite modest signs of strength, the first-term Texas senator needs a near miracle to catch the billionaire businessman.

The day-after delegate math laid bare the challenge: Cruz needs to win 83 percent of the remaining delegates to overtake the front-runner. And further complicating Cruz’s path, Ohio Gov. John Kasich vowed to stay in the race at least until the next primary.

“There is zero chance that we would drop out before Wisconsin. And there’d be no reason for us to,” Kasich told reporters as he campaigned in the state, acknowledging his only hope to secure the nomination lies at a contested convention this summer in Cleveland.

Kasich did not earn a single delegate in Tuesday’s contests, but suggested he would do “fine” in Wisconsin’s upcoming primary and would excel in late-April elections across the East.

A frustrated Cruz charged Kasich with playing “spoiler” by taking votes that could have gone to him. And in an interview, Cruz suggested that the Ohio governor’s political future could benefit from a speedy exit: “I think he’d be a tremendous addition to an administration,” Cruz said on CNN’s “New Day.”


Things were decidedly less contentious on the Democratic side.

Clinton won in Arizona on Tuesday, maintaining a lopsided advantage over Bernie Sanders in the Democratic race despite his wins in Utah and Idaho on the same night. The former secretary of state is now almost three-quarters of the way to the Democratic nomination.

As the world grapples with a new wave of overseas violence, Clinton engaged Trump on national security with a California speech painting him as a misfit as potential commander in chief and laying out what she’d do to keep America safe in perilous times.

Trump’s win in Arizona gave him a little less than half the Republican delegates allocated so far. He needs to win 54 percent of those remaining to claim his party’s nomination before the July convention.

Candidates signaled they would spend a lot of time in Wisconsin over the next 12 days.

“It’s pivotal for all three candidates,” said Republican National Committee Chairman Reince Priebus, the former state chairman of the Wisconsin GOP. The state’s voters, he said, “are going to find themselves at the center of the political universe.”

Walker, whose run for president ended in September after a 90-day campaign, has yet to endorse anyone in the race. But he made his analysis clear.

“Senator Cruz is the only one who’s got a chance, other than Donald Trump, to win the nomination. My friend Governor Kasich cannot,” Walker said in an interview with WTMJ-AM broadcast on Wednesday.

Cruz also won the first-ever presidential endorsement of the political arm of the conservative Club for Growth, a group that engaged the billionaire in a war of words earlier in the year.

“Their records make clear that Ted Cruz is a consistent conservative who will fight to shrink the federal footprint, while Donald Trump would seek to remake government in his desired image,” said Club President David McIntosh.