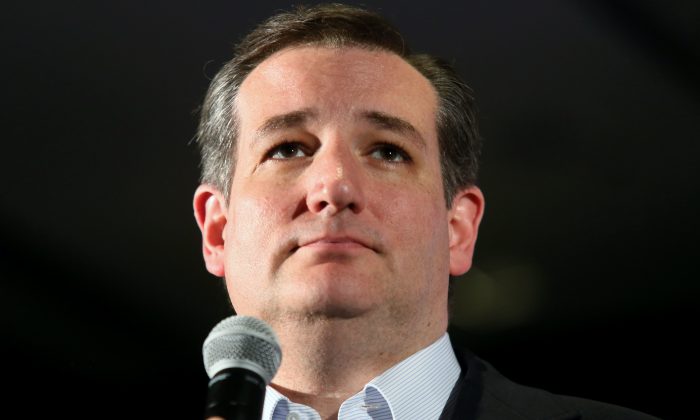 Ted Cruz is dropping out of the Republican presidential primary, all but handing the nomination to Donald Trump.

Cruz delivered the news to a somber crowd of supporters in Indianapolis.

“I’ve said I would continue on as long as there was a viable path to victory; tonight I’m sorry to say it appears that path has been foreclosed,” said Cruz.

In late April, it had already became mathematically impossible for Cruz to garner 1,237 delegates, even if he had won the rest of the primaries, because there weren’t enough delegates left.

The Cruz campaign was counting on winning enough voters to deny Trump 1,237 delegates and go to a contested convention, but Trump’s victory in Indiana, and favorable polls in California, made it clear that the frontrunner would likely cross the finishing line.

Trump still must win about 200 more delegates to clinch the nomination. But his victory in Indiana—where he picked up at least 45 of the state’s 57 delegates—made it all but impossible for Cruz to block him from doing so.

Before the May 3 results, Cruz had vowed to stay in the race through the final primaries in June, clinging to the possibility that Trump would fall short of the 1,237 delegate mark.

Trump now faces pressure to unite a Republican Party that has been roiled by his candidacy. But whether he can accomplish that remains uncertain.

A fall showdown between Hillary Clinton and Trump would pit one of Democrats’ most experienced political figures against a first-time candidate who is deeply divisive within his own party. Cruz and other Republicans have argued that Trump would be roundly defeated in the general election, denying their party the White House for a third straight term.

Trump, Clinton All but Certain to Face Off in Fall Campaign

According to Real Clear Politics, Trump trials behind Hillary Clinton by 6 points nation-wide. In the swing-state of Ohio, Trump is only 3 points behind Clinton, according to Public Policy Polling.