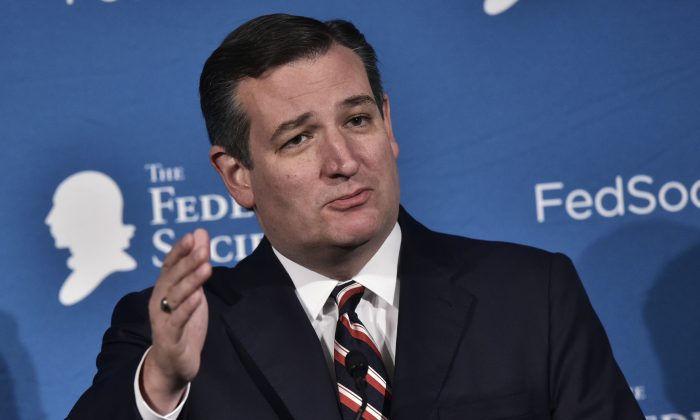 Republican. Sen. Ted Cruz announced he’s introducing an amendment to the U.S. Constitution to impose term limits on members of Congress, including himself.

In an editorial published in the Washington Post, Cruz and Sen. Ron DeSantis, a Republican senator from Florida, argue that congressional term limits are a good start to “drain the swamp,” as President-elect Donald Trump said during his campaign in reference to weeding out perceived corrupt elements in Washington.

“As soon as the 115th Congress convenes, both of us will move to restore accountability among the entrenched Washington establishment by introducing a constitutional amendment to limit the number of terms that a member of Congress can serve to three in the House and two in the Senate,” the editorial reads.

“Passing term limits will demonstrate that Congress has actually heard the voice of the people.”

According to a recent poll, the majority of Americans polled overwhelmingly supported term limits. About 74 percent of likely U.S. voters in October told Rasmussen Reports they want to see term limits.

“Though our Founding Fathers declined to include term limits in the Constitution, they feared the creation of a permanent political class that existed parallel to, rather than enmeshed within, American society,” the two senators added. They quoted Founding Father Benjamin Franklin, who said, “In free governments, the rulers are the servants, and the people their superiors … For the former therefore to return among the latter was not to degrade but to promote them.”

The term limits, they added, will mean there are more changes in Washington and a push to “[overcome] the Beltway inertia that resists attempts to reduce the power of Washington.”