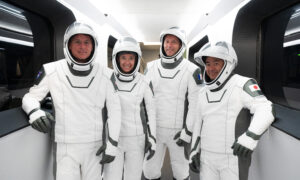 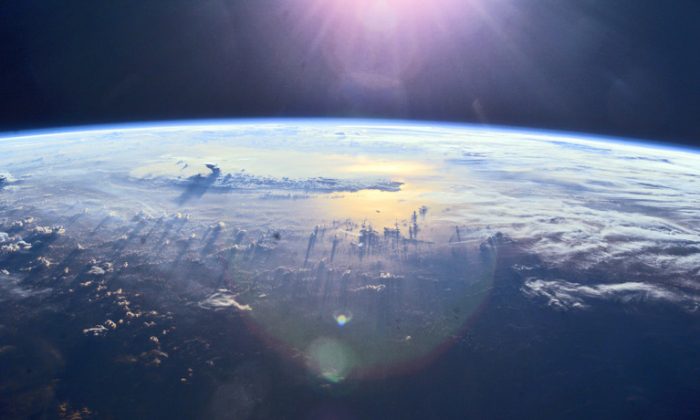 A file photo of Earth from space (NASA)
Science

Tectonic Plates in the Pacific Are Not so Rigid

The tectonic plate that dominates the Pacific “Ring of Fire” may not be as rigid as many scientists have assumed.

New research suggests that cooling of the lithosphere—the outermost layer of Earth—makes some sections of the Pacific plate contract horizontally at faster rates than others, which causes the plate to deform.

The effect is most pronounced in the youngest parts of the lithosphere—about 2 million years old or less—that make up some of the Pacific Ocean’s floor.

The tectonic plates that cover Earth’s surface, including both land and seafloor, are in constant motion; they imperceptibly surf the viscous mantle below. Over time, the plates scrape against and collide into each other, forming mountains, trenches, and other geological features.

On the local scale, the movements cover only inches per year and are hard to see. The same goes for deformations of the type described in the new paper that is published in Geology, but when summed over an area the size of the Pacific plate, they become statistically significant.

The new calculations show the Pacific plate is pulling away from the North American plate a little more—approximately 2 millimeters a year—than the rigid-plate theory would account for. Overall, the plate is moving northwest about 50 millimeters a year.

“The central assumption in plate tectonics is that the plates are rigid, but the studies that my colleagues and I have been doing for the past few decades show that this central assumption is merely an approximation, that is, the plates are not rigid,” says Richard Gordon, professor of geophysics at Rice University. “Our latest contribution is to specify or predict the nature and rate of deformation over the entire Pacific plate.”

The researchers already suspected cooling had a role from their observation that the 25 large and small plates that make up Earth’s shell do not fit together as well as the “rigid model” assumption would have it. They also knew that lithosphere as young as 2 million years was more malleable than hardened lithosphere as old as 170 million years.

“We first showed five years ago that the rate of horizontal contraction is inversely proportional to the age of the seafloor,” he says. “So it’s in the youngest lithosphere (toward the east side of the Pacific plate) where you get the biggest effects.”

The researchers saw hints of deformation in a metric called plate circuit closure, which describes the relative motions where at least three plates meet. If the plates were rigid, their angular velocities at the triple junction would have a sum of zero. But where the Pacific, Nazca, and Cocos plates meet west of the Galápagos Islands, the nonclosure velocity is 14 millimeters a year, enough to suggest that all three plates are deforming.

“When we did our first global model in 1990, we said to ourselves that maybe when we get new data, this issue will go away,” Gordon says. “But when we updated our model a few years ago, all the places that didn’t have plate circuit closure 20 years ago still didn’t have it.”

There had to be a reason, and it began to become clear when the researchers looked beneath the seafloor.

“It’s long been understood that the ocean floor increases in depth with age due to cooling and thermal contraction. But if something cools, it doesn’t just cool in one direction. It’s going to be at least approximately isotropic. It should shrink the same in all directions, not just vertically,” he says.

A previous study by Gordon and former Rice graduate student Ravi Kumar calculated the effect of thermal contraction on vertical columns of oceanic lithosphere and determined its impact on the horizontal plane, but viewing the plate as a whole demanded a different approach.

“We thought about the vertically integrated properties of the lithosphere, but once we did that, we realized Earth’s surface is still a two-dimensional problem,” Gordon says.

For the new study, Gordon and coauthor Corné Kreemer, associate professor at University of Nevada, Reno, started by determining how much the contractions would, on average, strain the horizontal surface. They divided the Pacific plate into a grid and calculated the strain on each of the nearly 198,000 squares based on their age, as determined by the seafloor age model published by the National Geophysical Data Center.

“That we could calculate on a laptop,” Gordon says. “If we tried to do it in three dimensions, it would take a high-powered computer cluster.”

The surface calculations were enough to show likely strain fields across the Pacific plate that, when summed, accounted for the deformation. As further proof, the distribution of recent earthquakes in the Pacific plate, which also relieve the strain, showed a greater number occurring in the plate’s younger lithosphere.

“In the Earth, those strains are either accommodated by elastic deformation or by little earthquakes that adjust it,” he says.

“The central assumption of plate tectonics assumes the plates are rigid, and this is what we make predictions from,” Gordon says. “Up until now, it’s worked really well.

“The big picture is that we now have, subject to experimental and observational tests, the first realistic, quantitative estimate of how the biggest oceanic plate departs from that rigid-plate assumption.”