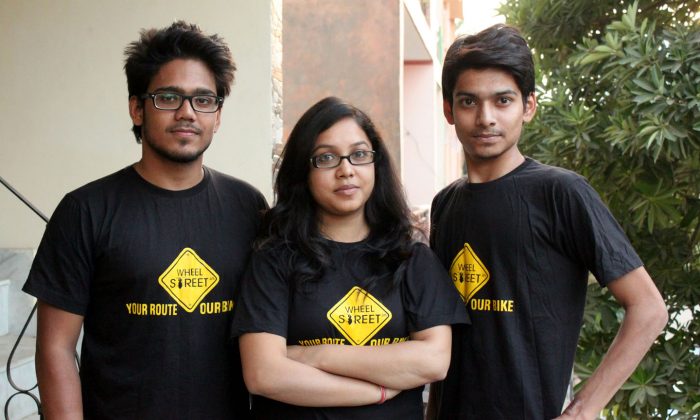 NEW DELHI—With education, a solid understanding of IT, and an unorganized market with tremendous possibilities, young Indians are churning ideas into successful businesses at a rapid pace.

Pranay Shrivastav, a 21-year old IT entrepreneur who recently graduated from engineering college is one such example. “I had a [motor] bike and I used to rent it out,” he said. “Then I realized, ‘Why not convert this into a business?’ and [I] started wheelstreet.in.”

Wheeltreet is India’s first online motor bike portal that lets businesses and individuals all over Delhi rent out their motor bikes with just a few clicks.

Until Wheelstreet came along, there was no easy way to compare the rates and availabilities of different bikes as renters were scattered all over the city. “This unorganized market is huge,” said Pranay, who hopes the portal solves the difficulty of trying to find a bike to rent in the sprawling city.

Pranay’s core team includes two others in their twenties, one still in school and the other recently graduated. They have are hired two IT interns to work on the website, and plan to make them core team members as soon as they have more money.

Pranay and his team are part of a wave of young IT entrepreneurs who are shirking traditional careers paths and making their own way instead.

A 2013 survey of a 1,117 students all over India by the International School of Entrepreneurship Education and Development (ISEED), found that more than 87 percent of respondents aspired to become an entrepreneur at one point in their life. Ninety percent believed India is full of entrepreneurship opportunities and 30 percent want to start an entrepreneurial career immediately after completing their studies.

And that entrepreneurship could be contagious.

Pranay was inspired by his sister Pankuri Shrivastav, who is one of the founding members of GrabHouse, India’s first and only broker-free website that connects housing seekers with housing sellers and renters.

“Students and young working professionals face a lot of problems when they move to metro cities and look to live in a rental place. Grabhouse came from a personal experience of having to find an affordable house in Mumbai,” explained Pankuri.

According to Pankuri, Grabhouse is disrupting the traditional real estate market in India where real estate agents control the transaction and charge hefty brokerage fees.

She says it gives her a strong sense of purpose, but that starting a new business requires a lot of hard work.

“Grabhouse has been a steep learning curve for me,” she said. “I have evolved as an individual and come out as a strong leader.”

Like Pankuri’s quest for housing in Mumbai, Akshay Verma started SkillHippo.com to create a hub for what he calls the unorganized “skill market.”

According to Verma, there are 30,000 trainers in Delhi alone who rely primarily on the market for their livelihood and he is capitalizing on the fact that that market is largely decentralized.

“We are singularly organizing the skill market,” Verma said confidently.

According to Verma, SkillHippo has not yet received any funding, but has 100,000 users, 15,000 subscribers, and plans to expand to other Indian cities soon.

With the technology, the will and motivation to provide solutions to the existing needs in the Indian society, youngsters like Pankuri, Pranay, and Verma are unintentionally helping to organize markets in India, making it easier for people to connect, and goods and services to be traded.