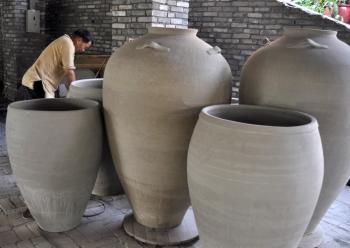 Foshan, China - A worker makes a pottery product at the Ancient Nanfeng which was built up in Ming Dynasty (A.D. 1506-1521). (China Photos/Getty Images)
Home

Christina Riveland
View profile
Follow
biggersmaller
Print
My first encounter with Chinese porcelain came about 30 years ago, when a friend presented me with a bouquet of pale pink carnations in a celadon vase. I was immediately enchanted with the glaze and color of the vase and decided to do research into Chinese porcelain.

Since then I have acquired many more pieces of celadon ware, and am also collecting porcelain teapots and matching cups. My favorite is a white teapot and matching cups with a rice grain pattern, adorned with blue décor. But I also use a tiny earthenware pot to brew my "morning tea" to wake me up for the labors of the day.

I have since discovered that several Chinese provinces are famous for their own porcelain creations. Below are listed just a few.

Jun Porcelain manufacture goes back Song Dynasty (960–1279) and originated in Yuzhou, Henan Province. The porcelain is known for its bright color, elegant proportions, exquisite shapes, and clear sound when tapped. Several dynastic emperors were fond of it, considered it rare, and commissioned utensils for the royal court.

Very few commoners could afford these possessions, and prices rose. The uniqueness of this porcelain comes from the craftsmen's way of firing the green-ware, as the unfinished piece is called. Application of copper and the craftsman's skills play a distinct role in how the finished piece will look.

The Ru porcelain, originating in Rushou, near Yuzhou, is another specialty heralding back to the Song Dynasty. Ru porcelain appears smooth and glistening, as if it has just been taken out of water. Three main features of this porcelain are the "pear peel," referring to the tiny spots scattered under glaze; the "crab paw," meaning the glaze's web-like texture, and the "sesame flower," the shape of the cracks in the glaze.

Colors include pinkish green, gray-blue, and tawny, with under-glaze patterns and birds. This style of pottery is prized, and many modern adaptations masquerading as antiques are for sale.

Hebei Province has introduced Tangshan porcelain, something fairly new for the area. It is functional, serving for industrial purposes and daily uses, but also includes some artistic pieces. The most precious among the porcelain for civil use are the cinder porcelain, white-jade porcelain, and the magnolia porcelain.

The white-jade porcelain is hard, baked under high temperature. The chief ingredient for cinder porcelain is the cinder of animals, and for the magnolia porcelain it is talcum. Both are well-known and appreciated worldwide. I consider myself fortunate to own a Tangshan teapot.

And more now about celadon ware, produced primarily in Longquan, Zhejiang Province. The Longshan kilns began operating in the 10th century and came into prominence during the Southern Song Dynasty (1127–1279). The pieces look simple in design and color under their glaze. But techniques such as relief and hollowing out make for unique effects, sometimes making thin pieces appear semi-transparent. Good-quality celadon is quite expensive now.

Dehua in Fujian Province and Jianyang produce black and white porcelain pieces. Dehua manufacture goes back to the Tang Dynasty (618–907). Factories shipped their wares to Southeast Asian countries during the Song Dynasty via the port of Quanzhou. White porcelain production began during the Ming Dynasty (1368–1644).

Most Shiwan porcelain products are human figures. A visit to the Foshan Ancestral Temple will leave one with a deep impression of the porcelain figures on eaves, roofs, and walls. Shiwan porcelain, little pottery figures, animals, and pavilions to set into a bonsai container may be as small as a pea or a grain of rice.

There are so many types of Chinese porcelain to choose from, and all the good-quality pieces are worth the price they fetch. But for the time being, I would like to own an item representative of each province.

Right now I intend to stick to an occasional teacup because that is all I can afford. I encourage any and all to take a closer look at a marvelous piece of Chinese porcelain and pottery, and give credit to the unique skills the artisans use to create such enjoyable, useful art.