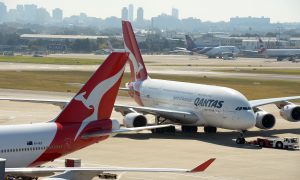 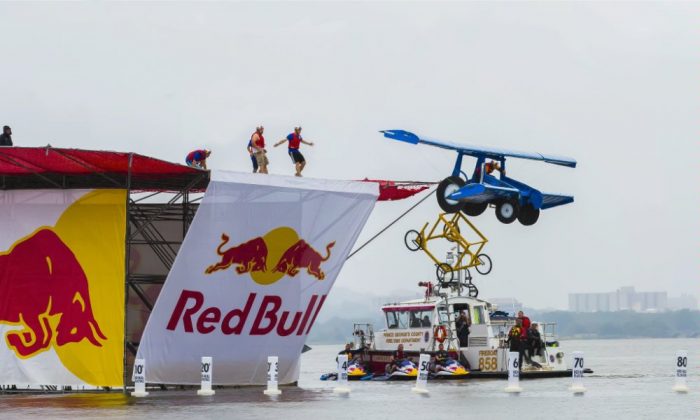 First place team Harvest Bureau from New Holland, Pennsylvania launch their ' angry tractor with wings' off of the 24 foot high platform at the National Red Bull Flugtag DC at the National Harbor on Sept. 21. ( Photo/ Red Bull USA)
US

The flying vessels launched off a 24-foot-high platform. The participants hoped to catch flight before landing into the Potomac River.

At the same time of the Flugtag in the national capital, four other Red Bull Flugtag events were held simultaneously in Miami, Chicago, Dallas/ Ft. Worth, and Long Beach, Calif.

“It’s going to take us to the moon!,” said a member of The Parliament Flug-a-delic Team before launching their ‘atomic dog’ into the Potomac River.

A few of the machines collapsed on the launching platform before take-off. Yet that didn’t deter the teams from fulfilling their mission of an attempt at flight. Nor did it deter the crowd of 10,000 ticketed spectators from cheering them on from the banks of the Potomac near the Gaylord National Resort & Convention Center.

Before rocketing into the river, participating teams jammed to the tunes that they felt most appropriate, some did a little dance in elaborate costumes to match their vessel theme and then they were ready to go.

Team Bobby McKey’s Flying Ivories, representing Bobby McKey’s Dueling Piano bar at the National Harbor brought with them a large support group attired in neon green t-shits that on the back read, ‘I believe.’ One host called the group a flash mob.

Before pushing their twin grand piano flying machine off of the platform, Team Bobby Mickeys played a musical medley of songs heard at the bar: Benney and the Jets, Great Balls of Fire, Sweet Caroline, ending with “Don’t Stop Believing” as their vessel was launched.

“Awesome music, awesome flash mob and at the end it was all about the journey!” said one of the judges.

The crowd roared for Viking Army SC team from New Jersey, when their Viking vessel floated in the Potomac after its launch.

A member of the Art of Flug team from Connecticut did a backflip into the Potomac.

“I saw the water and thought why not go for it,” said the team member who completed the flip.

After the Art of Flug team launched, the rain subsided. However, it returned near the end of the event.

Celebrity judges scored the flugtag teams on the distance their machines traveled in the air, on creativity, and on showmanship.