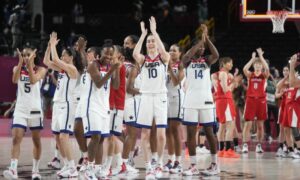 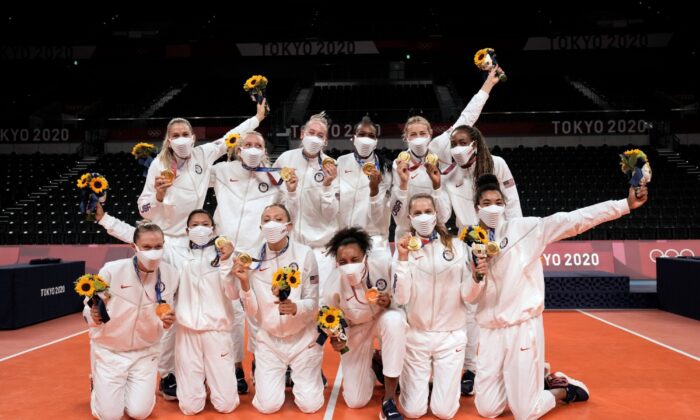 Players from the United States pose after winning the gold medal in women's volleyball at the 2020 Summer Olympics, in Tokyo, Japan, on Aug. 8, 2021. (Manu Fernandez/AP Photo)
Tokyo 2020 Olympics

America topped the medals table at the 2020 Tokyo Olympics on the final day with 39 gold medals, barely beating China, which finished in second place with 38 golds.

The United States easily outnumbered any other country in medals overall, taking home 113 in total—39 gold, 41 silver, and 33 bronze. Team USA earned 25 more than second-place China, which is bringing home 88 medals, including 32 silver and 18 bronze.

“We are thrilled by the performance of Team USA at the Tokyo Games—and couldn’t be more proud of the way they carried themselves,” said Susanne Lyons, chair of the USOPC. “These Games are one for the history books.”

The United States has topped the medals table in golds at each of the past three Olympics—in London, Rio de Janeiro, and Tokyo. In terms of overall medals, they have won the most for seven consecutive Olympics. China won the most gold medals at the 2008 Beijing Summer Olympics.

The United States was behind China in gold medals on Aug. 7 as the Summer Games headed into the final day.

The team had to rely on Sunday winners—including their women’s basketball team, which grabbed a seventh-straight gold—to reach the top of the standings for the third time in a row. The gold medal that placed the Americans at the top of the table was after the U.S. women’s volleyball team finally claimed an Olympic gold with a victory over Brazil.

“Finally we got a gold and we became the Olympic champion,” U.S. head coach Karch Kiraly said.

Japan, the host country, had its best-ever production in each category: the most gold medals, the most overall, and a third-place finish in gold medals behind the U.S. and China.

“Japan’s national team was able to make its own record result this time,” deputy delegation head Mitsugi Ogata said as the Olympics ended. “We don’t want this to be like disappearing fireworks. We think it is important that we keep this momentum going through Paris 2024, and Los Angeles 2028.”

Japan’s Prime Minister Yoshihide Suga thanked everyone after the Tokyo Olympics ended for helping them to safely hold the event as they were delayed by a year and held under tight restrictions due to the COVID-19 pandemic.

“I believe we were able to fulfill our responsibility as the host nation,” Suga said.