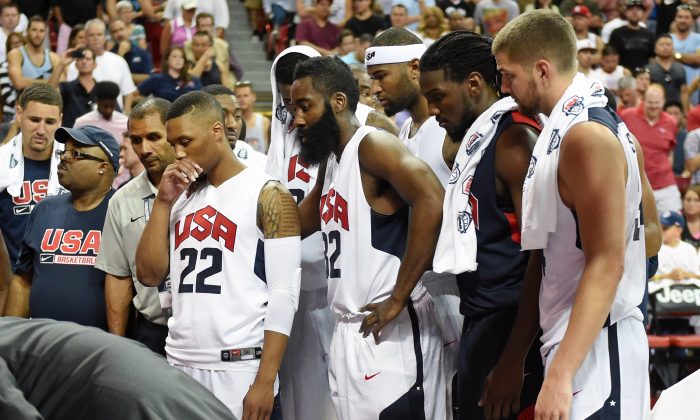 The Team USA scrimmage on Friday night is over after Paul George was injured early in the fourth quarter.

Before the injury, the game was pretty exciting and gave some new insight into who may or may not make the final roster, which will be announced within the next week or so.

Let’s update the roster predictions based on what happened in the game.

The previous predictions were:

Some players played extremely well in the scrimmage, That play was going to be factored into the final roster, Team USA managing director Jerry Colangelo told NBA.com before the game.

Derrick Rose did play well and should get on the final roster, leaving a tough choice for the other guards.

Kyle Korver also needs to be added to the roster. He played an excellent game, proving his superior shooting ability. Unfortunately, because I’m a Wizards fan, that seems to leave Bradley Beal off–Beal didn’t play.

DeMar DeRozan also played so well that he should probably get on the final squad. He should replace Kyrie Irving, who didn’t stand out. John Wall should stay because of his speed, defense (anyone catch the block of Damian Lillard?), and great passing.

Gordon Hayward also had a strong game. With Paul George likely off the final roster due to the injury, I’d add Hayward onto the squad. I’ll also remove Chandler Parsons, who didn’t play very well. Note that DeRozan, Thompson, and James Harden could all spend time at small forward, while Hayward and Kevin Durant could play at power forward.