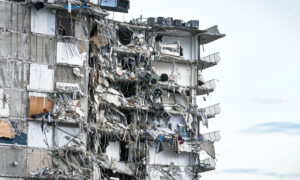 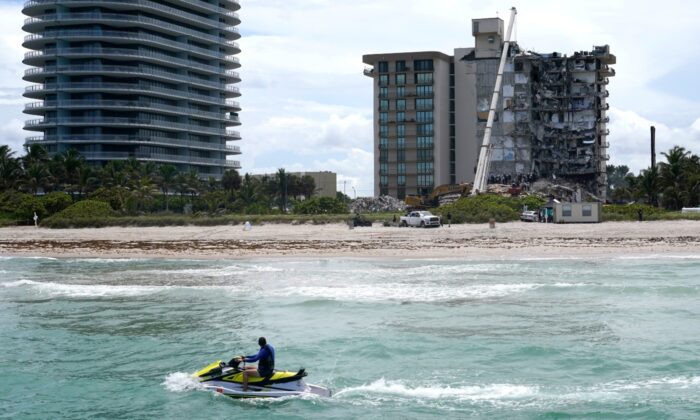 A jet ski rides by as rescue workers search in the rubble for survivors at the Champlain Towers South condominium, in the Surfside area of Miami, Fla., on June 26, 2021. (Lynne Sladky/AP Photo)
Florida

Team of Specialists Sent to South Florida to Probe Collapse

WASHINGTON—A half-dozen scientists and engineers who specialize in disastrous structure failures are headed to south Florida to collect firsthand information on the cause of the catastrophic Champlain Towers South collapse.

Their initial work will be used to determine whether to pursue a more thorough study.

The first two members of the team arrived in Florida on Friday and four more will be there by Monday, said Jason Averill, an official at the National Institute of Standards and Technology. That agency also investigated disasters such as the collapse of the Twin Towers on 9/11, the 2011 Joplin, Missouri, tornadoes and Hurricane Maria’s devastation in Puerto Rico.

Averill said the team will collect information over the next week to decide whether a more thorough investigation is warranted. The team’s aim is to help determine what caused the collapse and suggest future steps to avoid another such disaster. He said the team will avoid getting in the way of efforts to rescue trapped residents and disaster response teams.

Earlier investigations have sometimes taken a couple of years or more and resulted in thorough recommendations of future steps, he said. Averill is chief of the materials and structural systems division at the institute.

The “experts will work with federal, state and local authorities to identify and preserve materials that might be helpful in understanding why the collapse occurred,” said Jennifer Huergo, an agency spokeswoman.