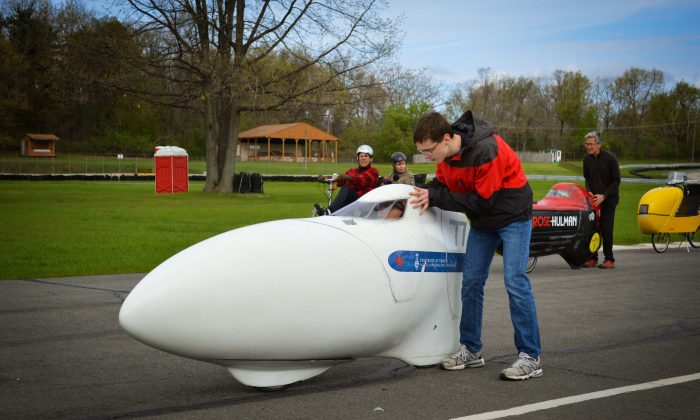 A Toronto team is hoping to break the current land speed record for a human-powered vehicle with the Eta, a recumbent bicycle encased in a slick bullet-shaped shell. (Courtesy of AeroVelo)
Canada

TORONTO—The Canadian team that made an aviation breakthrough last year is trying for a new milestone—the land speed record for a human-powered vehicle.

Headed by two University of Toronto alumni, the team is currently working on a bicycle that can go faster than the current world record of 133.8 km/h.

“The helicopter was huge in forming our approach here,” said Cameron Robertson, one of the team leaders.

Robertson said while the aerodynamics of the vehicle—a recumbent bicycle encased in a slick bullet-shaped shell—are different from the helicopter, the choices of materials and manufacturing processes are similar.

A vehicle by a Dutch team set the record at the World Human-Powered Speed Challenge last fall. Before that, Sam Whittingham of Quadra Island, B.C., held it for nearly 14 years and the Toronto team is hoping to take it back for Canada at this year’s challenge in September.

The team’s vehicle is dubbed “Eta,” the Greek letter widely used in science to denote efficiency, and currently has three test-riders. Only one will ride it at the record-breaking attempt at Battle Mountain, Nevada.

Robertson said it will likely be Todd Reichert—the other team leader, who also piloted the helicopter last year—who produces about 10 to 15 percent more power than the others.

Brian MacIntosh, a kinesiology professor at the University of Calgary, said record breakers have been pushing the peak of human fitness over the years, and bigger gains in speed can be made from better machine designs.

He added that cycling is still the most efficient way to harness the human body.

Not only does it make use of the powerful leg muscles, it also holds a unique advantage over other propulsion methods.

“In rowing, it’s intermittent. You apply a force, you accelerate forward, and then, during the recovery, you slow down. In skating, it’s the same thing,” MacIntosh said.

“In cycling, you can apply force to the cranks almost continuously.”

The project will cost $120,000 in total, most of which, Robertson said, will come from donations and sponsorship.

The team reached its goal of raising $30,000 through crowdfunding on July 8. A functional vehicle is expected to be completed by the end of the month.