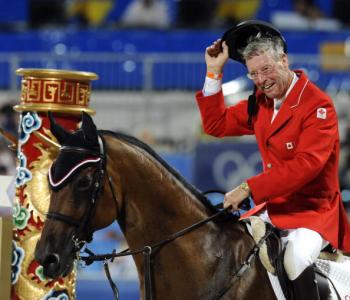 Canada' s Ian Millar reacts after riding with 'In Style' during the Equestrian Jumping Individual competition of the 2008 Beijing Olympic Games in Hong Kong on August 18, 2008. (David Hecker/AFP/Getty Images)
US

"The support we've had all year, everybody's recognized that we had a shot at this thing, such enthusiasm, such support, and that's a big motivator to us," said Millar in an interview with the Canadian Broadcasting Corporation (CBC). "We all say thank you very much to those who support it and those who believe in us."

Millar competed this year despite losing his wife, Lynn, to cancer earlier in the year.

"I remember back in the early '70s when I had a disastrous Grand Prix, my wife, Lynn, said to me, 'Don't worry, you're going to be a late bloomer.' That's what she said to me and I've always held that thought," said Millar. "And so the Olympics don't go well and I'd say, 'Lynn said I'm a late bloomer. I'll go to the next one.'

"And sure enough, guess what happened? I bloomed."

In the Women’s Trampoline, 27-year old Karen Cockburn of Stouffville, Ontario won her third medal in as many Olympic visits, taking the silver with a score of 37.00 in a routine with a difficulty factor of 14.4.

"I was just honored to be here competing in my third Games for Canada and to come out again on the podium with a silver medal… I don't think it's sunk in yet, but I'm really happy," Cockburn told the CBC.

The achievement made Cockburn the fourth Canadian in a non-team or non-relay event to win a medal in three straight Olympic Games, joining the ranks of Phil Edwards in track and field, Leslie Thompson-Wille in rowing, and Caroline Brunet in kayaking.

Canadian diver Emille Heymans will also join that group if she reaches the podium in the Women’s 10-Meter platform diving event.

"I just started this sport for fun and it wasn't an Olympic sport. Then it got into the Olympics, I went to three Games and I have a third medal. I'm still trying to soak it in I think," said Cockburn.

Cockburn also had her share of difficulties to overcome after tearing the cartilage in her right knee while preparing for the 2007 World Championship in Quebec City.

Although recovery wasn’t a guarantee, Cockburn prevailed and won her last World Cup event before the Games.

"The week before the world championships I couldn't walk… That took a lot and going for the surgery after those championships and coming back on a time constraint, I learned to work under those deadlines,” said Cockburn.

"Everything fell into place and I'm just so happy. That's why this medal means so much to me because of what I had to go through this year to get to this point."

She also thanked Dave Ross, her coach of 17 years for all his support and guidance throughout her career.

“I've known him since I was 11 years old," said Cockburn. "He's just meant too much to me as a coach and also developing me as a person.

"I've just learned so much from him along the way."