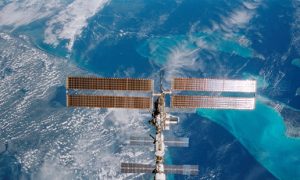 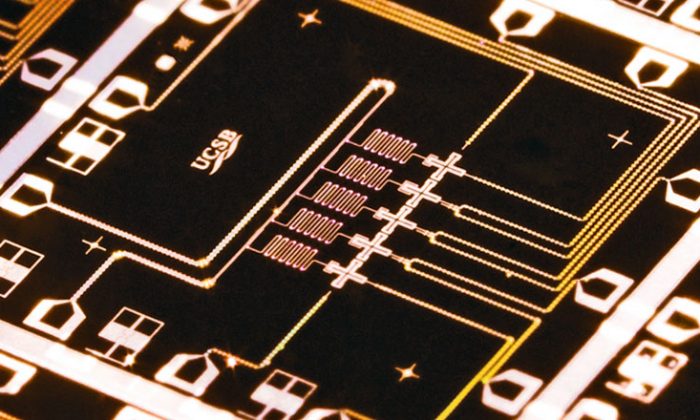 The team chose to place five Xmons (the cross-shaped devices) in a single row, with each qubit talking to its nearest neighbor, a simple but effective arrangement. (Erik Lucero/Futurity.org)
Tech

Physicists are closer to making a quantum computer a reality by demonstrating a new level of reliability in a five-qubit array.

A fully functional quantum computer is one of the holy grails of physics. Unlike conventional computers, the quantum version uses qubits (quantum bits), which make direct use of the multiple states of quantum phenomena. When realized, a quantum computer will be millions of times more powerful at certain computations than today’s supercomputers.

Quantum computing relies on aspects of quantum mechanics such as superposition. This notion holds that any physical object, such as an atom or electron—what quantum computers use to store information—can exist in all of its theoretical states simultaneously. This could take parallel computing to new heights.

“Quantum hardware is very, very unreliable compared to classical hardware,” says Austin Fowler, a staff scientist in the physics department at the University of California, Santa Barbara, whose theoretical work inspired the experiments. “Even the best state-of-the-art hardware is unreliable. Our paper shows that for the first time reliability has been reached.”

While Fowler and colleagues have shown logic operations at the threshold, the array must operate below the threshold to provide an acceptable margin of error.

“Qubits are faulty, so error correction is necessary,” says graduate student and co-lead author Julian Kelly, who worked on the five-qubit array.

“We need to improve and we would like to scale up to larger systems,” says lead author Rami Barends, a postdoctoral fellow with the group. “The intrinsic physics of control and coupling won’t have to change but the engineering around it is going to be a big challenge.”

Five Xmons in a Single Row

The unique configuration of the group’s array results from the flexibility of geometry at the superconductive level, which allowed the scientists to create cross-shaped qubits they named Xmons.

Superconductivity results when certain materials are cooled to a critical level that removes electrical resistance and eliminates magnetic fields. The team chose to place five Xmons in a single row, with each qubit talking to its nearest neighbor, a simple but effective arrangement. The team reports its results in the journal Nature.

“Motivated by theoretical work, we started really thinking seriously about what we had to do to move forward,” says John Martinis, a physics professor. “It took us a while to figure out how simple it was, and simple, in the end, was really the best.”

“If you want to build a quantum computer, you need a two-dimensional array of such qubits, and the error rate should be below 1 percent,” explains Fowler. “If we can get one order of magnitude lower—in the area of 10-3 or 1 in 1,000 for all our gates—our qubits could become commercially viable.

“But there are more issues that need to be solved. There are more frequencies to worry about and it’s certainly true that it’s more complex. However, the physics is no different.”

According to Martinis, it was Fowler’s surface code that pointed the way, providing an architecture to put the qubits together in a certain way.

“All of a sudden, we knew exactly what it was we wanted to build because of the surface code,” Martinis says. “It took a lot of hard work to figure out how to piece the qubits together and control them properly. The amazing thing is that all of our hopes of how well it would work came true.”