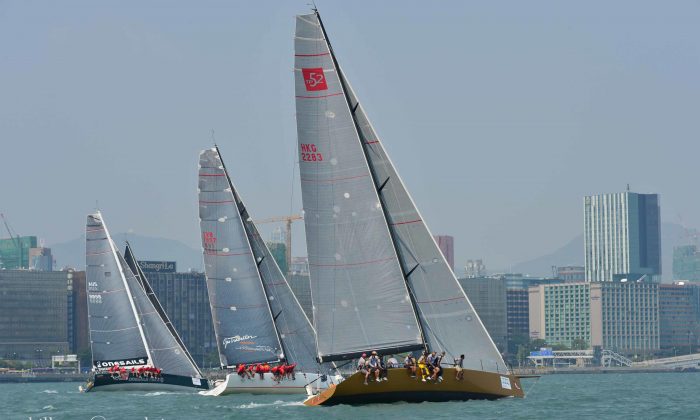 Boats ‘FreeFire’, ‘Team Beau Geste’ and ‘One Sails East’ with the sail of ‘mandrake 3’ in the background leaving the start line in Victoria Harbor on Thursday Oct 16, 2014 in the Hong Kong to Hainan race. (Bill Cox/Epoch Times)
Hong Kong

Wind was good at the start line in Hong Kong’s Victoria Harbor on Thursday at 1.20pm and strengthened as they left Lei Yue Mun gap for the open seas. A force 5 to 6 north easterly wind continued throughout the race giving exceptional sailing conditions all the way to Sanya on the south coast of Hainan Island.

Sam Chan has taken part in the race five times and has won the record twice, in different boats. Sam said he was pleased to get to Sanya at all as they changed a mast on “FreeFire” and had the boat re-rated in just 48 hours before the race.