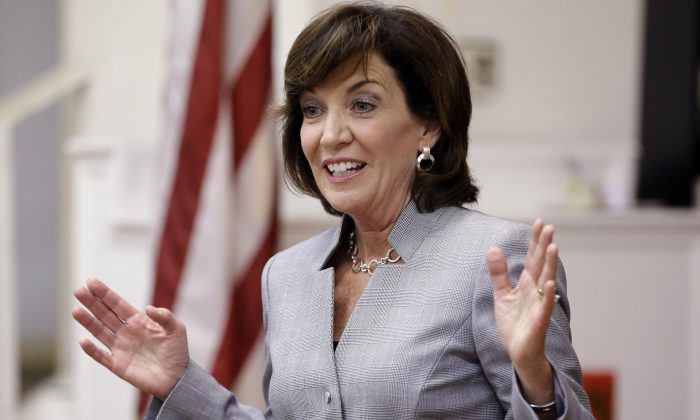 NEW YORK—The Teachout-Wu campaign has launched an all out assault on the governor’s running mate as the prospect of displacing Cuomo himself evaporates.

While the dust settles from the Moreland scandal, the governor’s approval rating holds at a steady 56 percent, and 88 percent of New York Democrats still don’t know about his challenger in the primary, Zephyr Teachout, according to a Quinnipiac poll from August 20.

In New York, the ballot lines are separate for gubernatorial candidates in the primaries. Thus, Tim Wu could be on the same ticket as Cuomo in the general elections if he beats Kathy Hochul, a relative unknown, in the primary.

Wu’s candidacy has made great strides in the past month. He’s received friendly coverage from major news outlets, and was endorsed by the New York Times editorial board on Wednesday.

Wu capitalized on Hochul’s record during her 19-month stint representing a Republican district in Congress from the start. A few days after Hochul announced her candidacy, Wu accused her of hiding from the press.

But with the primary less than two weeks away, Wu and Teachout have upped their attacks on Hochul. On Thursday they held a press conference in Albany to promote the second piece of a four-part “dossier” of Hochul’s record in Congress.

“I believe Kathy Hochul’s views and votes should be considered disqualifying for someone who is seeking the nomination of the Democratic party in this state,” Wu said.

The dossiers try to paint Hochul as a Republican through-and-through, with part one citing her vote to hold Attorney General Eric Holder in contempt, her vote to repeal certain parts of the Affordable Care Act, and her vote for the “No More Solyndras Act.

The second dossier focuses on Hochul’s environmental record, listing a litany of times Hochul voted against raising environmental standards. It also featured her votes to expand and expedite oil and natural gas drilling, including the controversial Keystone XL.

Hochul has tried to deflect these attacks in three waves. Initially, she tried to dismiss them as irrelevant given the paltry powers of her office, where she wouldn’t be “making policy,” she told NY1’s Errol Louis on July 18.

Later on, Hochul suggested that as someone representing a Republican district, her conservative voting record was inevitable. Only recently has she unabashedly marketed herself as a liberal.

“Despite the politics of my district, I never backed down from our Democratic values: pro-choice, pro-marriage equality, and pro-worker values,” she said in a video released Thursday.

The video also tries to parlay Hochul’s 51–49 percent defeat in her 2012 re-election to boost her left-wing credentials.

“I narrowly lost my re-election bid because I wouldn’t turn my back on the president and millions of Americans who deserve quality healthcare,” she said.

“As someone who had a progressive record in the most Republican district in the state, I know these issues are not rewarded at the ballot box, but they are the morally right stance to take.”

In response to the video, Wu once again called on Hochul to participate in a debate.

“We’re both in the same state, we’re both Democrats, we should meet and have a debate,” he said.

“If she wants to clarify her views and her record, as opposed to having these weird conversations where she puts out these videos and I release her dossier piece by piece, we could meet and debate her record.”