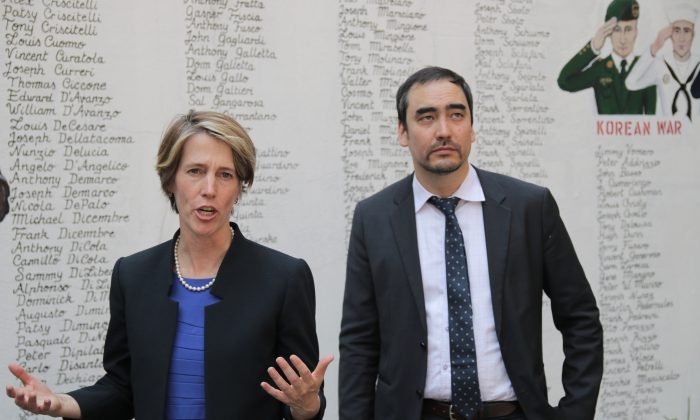 NEW YORK—In her meeting with the Downtown Independent Democrats (DID), underdog Democratic candidate for governor Zephyr Teachout stuck to her core theme of anti-corruption.

“Albany corruption is worse than ever, we are more beholden than ever to the oligarchs who say what tax breaks we must or must not give,” she told to a small crowd at the apartment of DID President Jeanne Wilcke.

Teachout briefly mentioned the Moreland Commission kerfuffle that has plagued Gov. Cuomo in recent weeks, which was sparked by a 6,000-word, front page New York Times report that insinuated the governor was using his powers to shield corrupt business allies.

“Speaking as a lawyer, I do not yet know if what Cuomo did was illegal,” Teachout said. “But it was absolutely wrong and a betrayal of public trust.”

The Times report charged Cuomo’s top aide of interfering with the anti-corruption Moreland Commission after it issued a subpoena on a media firm that had ties with Cuomo’s 2010 gubernatorial campaign.

Cuomo fired back Monday morning, citing the eventual subpoenaing of the firm as evidence of the commission’s independence.

“If you had watched the movie to the end, the name of the movie is ‘Independence,’ you named it Interference,” he told the throng of reporters at the University of Buffalo.

The media firm Buying Time did ultimately receive a subpoena, but only after an initial subpoena was rescinded, according to the Times report.

“What he said is a little bit like saying, I tried to tamper with the witness, but it didn’t work so I’m innocent.”

At the beginning of July, Teachout had named possible fallout from the federal investigation of the Moreland Commission as one of the top three reasons she could win the Democratic gubernatorial primary despite her status as an underdog.

A Siena College poll of 774 likely voters conducted in mid-July showed that 91 percent of New York Democrats either had no opinion on Teachout or didn’t know who she was.

Yet the scandal was peripheral to her speech, which stressed her own virtues and not her opponent’s faults.

“I’ve spent my life fighting big banks; I started a nonprofit devoted to breaking up banking power,” she said. “I was the national director of the Sunlight Foundation, the largest anti-corruption nonprofit in the country.”

“Before I thought of her as just a professor,” said DID President Jeanne Wilcke. “But now that I looked more into her credentials I think she has more substance.”