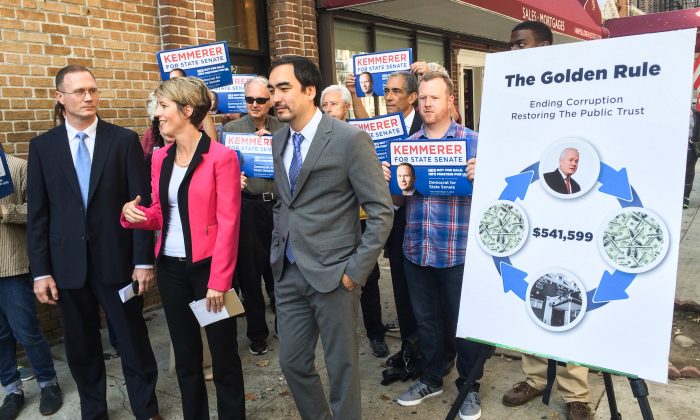 Teachout and Wu Endorse Kemmerer and His ‘Golden Rule’

Ms. Teachout and Mr. Wu excoriated Golden for spending over a half a million in campaign funds in the past decade at the Bay Ridge Manor, a catering hall owned by his brother and where his wife works as a manager.

“When I talk about the Old Boy’s Network, I’m talking about Marty Golden,” Teachout said, standing steps away from the Manor. “What he’s done here is, his company, his family business has received over half a million dollars from campaign funds and state funds. And you don’t need to be a genius to recognize there’s something wrong with that.”

Golden’s campaign spending habits dovetailed with Teachout’s longtime work on public campaign financing, the lack of which she blames for much of the corruption in American politics today.

Tim Wu, a law professor at Columbia most notable for his coinage of the term “net-neutrality,” touted Kemmerer’s tech credentials—he works as a web developer—and reiterated the importance of electing a Democratic majority in the state senate.

“He’s in Albany because he wants to serve the public interest, he is an anti-corruption crusader,” Wu said. “James is also from the tech-sector; when it comes to the industries of tomorrow, it is a Democratic Party, and it’s men like James who are leading the way against the past, against people like Marty Golden, against the corrupt politics of yesterday.”

Kemmerer had previously given support to and voted for Teachout and Wu in the Democratic primary, citing his frustration with Cuomo’s “prematurely shutting down the Moreland Commission.”

He promised that as state senator, he would sponsor an anti-corruption law that would crack down on certain uses of campaign funds, such as patronizing a business where “a family member who shares the same address as the elected official” also works. This would outlaw Golden’s expenditure at the Bay Ridge Manor, because he presumably lives with his wife.

Kemmerer played on his opponent’s name by dubbing his proposal “the Golden Rule.”

“In this age of corruption, New York state is one of the most corrupt states in the country. We have some of the highest campaign contribution limits, we have a lot of elected officials who are indicted, resign in their race, and even go to jail,” Kemmerer said.

“The idea [behind the Golden Rule] is that our elected officials should focus on what they can do for their communities rather than enrich themselves.”

Golden’s spokesperson Ray Riley fired back at Teachout and Wu’s endorsement by insinuating that they were a part of the extreme left, and supported Kemmerer only to return the favor.

“It’s never a surprise when Occupy Wall Street gets together. It’s unfortunate when it comes to Bay Ridge,” he said, alluding to Teachout’s participation in the 2011 protests against the finance industry.

“Jamie worked hard to try to keep Governor Cuomo from getting the Democratic nomination and Zephyr is returning the favor. It’s what some would call a political quid pro quo.”

Golden’s office has previously defended their patronage of the Bay Ridge Manor as a normal part of campaign expenditures.

“The senator hosts numerous community and political events throughout the district, throughout the year to directly engage his constituents and help them with various community concerns and legislative questions,” Riley told the Observer in February.

“We look for the best priced venue and the Bay Ridge Manor is one of them, and it also happens to be easily accessible by public transportation.”