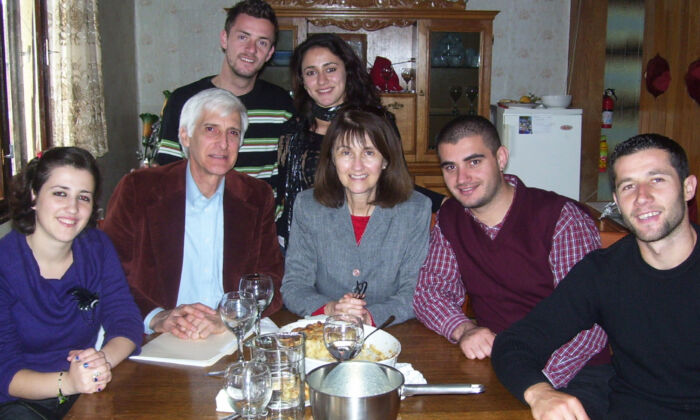 Bill and Sue Burtness with students from Pristina University, Kosovo, in November 2008. (Courtesy of Bill Burtness)
US News

Some volunteers of America won’t quit, even when they’re dying—or supposed to be as good as dead.

Such was the case with veteran American volunteers Bill and Susan Burtness of Illinois.

Now in their 70s, they advise fellow volunteers who may be weary from well-doing,  ”Don’t quit. the best is yet to come.”

“If you persevere, the volunteering life just keeps getting better and better,” Burtness said from his home on Jan. 10, 2022.

Not that hard and trying times are absent in volunteering.

There was the time Bill was lying in a hospital in a cage, strapped to a concrete slab in a foreign nation, with buckets of water being thrown on him to wash the blood off.

To make matters worse, he was in a terminally ill ward in a Dutch hospital, not expected to live.

“Yes, that was pretty hard,” Bill said.  “That happened while Susan and I were volunteering in Amsterdam, Holland, back in 1974, helping young hippie drug addicts get their lives back.”

The Burtnesses had already moved to Switzerland where they got basic volunteer training for three months.

They were recruited by one of the speakers to go to Amsterdam’s Dilaram House staffed by volunteers.

“We lived on two 50-foot boats lashed together at Steiger (pier) 14, in a community of about 50 people,” said Susan Burtness, “and we were in volunteer heaven there.”

“People could come visit and talk out their life concepts or problems. Some could move right on to the boats with the staff for a few months for longer term help. That’s how most of the addicts kicked heroin.”

Life was simple, she said.

“We’d all eat together, talk in groups, and help each other out.

“It was great seeing these young people come back to life and see a brand new light in their eyes. They looked motley and unkempt sometimes, but we got to know them, and they were like brand new creations to us. There’s nothing that compares to that. Nothing.”

There was one night, however, when their heaven turned into a kind of hell.

“It was winter and I got a cold,” he said. “I became sick with spinal meningitis. I was having seizures and biting my lips clean through. I was covered in my own blood.

“They threw buckets of water on me just to get me clean. It’s a good thing I was out of it and don’t remember much.”

But Susan Burtness remembers, only too well.

“Bill’s face was so disfigured because he’d bit his lips so much that I didn’t recognize him,” she said.

“He was lying in a strait jacket on a concrete slab because they were injecting last-ditch medicines directly into his brain.

“They were trying to save him and couldn’t do it. All we could do was pray. Now, we were the ones needing help.”

Doctors tried anything they could think of to drain and heal two abscesses in his brain, but nothing helped. They finally moved him to a terminally ill ward and told Susan Burtness to prepare herself for the worst.

To make it all the more desperate, she discovered she was pregnant with their first child just days before he became ill.

“Here I was, expecting my husband to die and I would be alone with our child, and I was thousands of miles from home. I was desperate.”

To make matters darker, if that were possible, was her shocking memory of the night two weeks earlier when he was taken to the hospital.

“The night they rushed Bill to the hospital, there was a violent storm with the wind just howling,” she said. “It was pitch black outside. The two boats were being rammed into the pier, over and over again.

“Suddenly the electricity went out and all the windows flew open on the decks where we lived and smashed to pieces.

“The boats broke loose from their moorings and we were drifting out to sea.

“At the same time Bill was screaming, ‘My head! My head!’ Everyone that could, was out on the dock, trying to get the boats back before they floated out into the harbor. No one could help us.”

After the staff and guests wrestled the boats back to the pier, Bill Burtness was hurried to the hospital.

“I was just trying to grasp the situation and hang on,” Susan Burtness said.

“I imploded. It was a very fearsome moment. It was literally like the cords of death were entangling me, like torrents of destruction were all around me. All I could do was pray.”

The relationships they had formed in Switzerland now gave them friends from all over the world.

“Those were praying for us too,” Susan Burtness said. “They sent notes and called me, and were so encouraging. I would not have made it without that kind of support from other volunteers who understood us.”

Meanwhile, Bill Burtness was expected to die with the rest of the desperately ill in his ward.

“I remember hearing late at night, people in our ward cursing and crying,” he said. “Somehow, I got up and went to their beds and prayed for those poor people. I don’t remember much after that at all.”

Bill Burtness walked out of the terminally Ill ward shortly afterwards. He was the only patient to come out of the room alive.

The doctor’s verdict to Susan Burtness was, “We didn’t do this. We know a miracle when we see one.”

The Mind of a Child

But Bill Burtness was different now.

“He was alive and walking, but he had the mind of a child,” said Susan Burtness. “We flew home to Illinois. Bill would sleep 18 hours a day, recovering.”

When he woke from his sleeping, he was different again.

“He started writing lessons on what he was learning. He’d never been like that before. He wasn’t a teacher. He was an electrical engineer and his strength was math, not philosophy.”

Bill Burtness began compiling home-school curriculums for his own children, now three in number, and years later, for their children and their friends.

Soon, he was distributing his curriculum to interested people throughout America. Some private schools even began using them. He self published his research notes and began handing them out.

“It wasn’t clear where all this would lead,” Bill Burtness said, but the study was so fascinating and people seemed so glad to have the curriculum and notes, we didn’t stop. There was little money that came to us from it, but that didn’t matter.”

Then on a volunteer trip to Kosovo in 2000 to build fresh water wells their lives changed forever.  They didn’t know it, but years of preparation were about to pay off.

“A doctor also volunteering in Kosovo got ahold of my self published notes and passed it on to a Regent at the University of Pristina,” Bill Burtness said.

“This doctor set up a lunch meeting.  The Regent said he was impressed with the notes and the doctor blurted out,”And Bill wants to teach this as a course at the university.’ I was shocked. I had never said or even thought of such a thing. I looked at the doctor and said, “I do?” and he said, “Yes! You do!”

The Regent was in agreement, and said “we can arrange that. When are you available?”

The offer was beyond what they could think or imagine.

“That was the only time I’d even been talked to about teaching a university level class. They were going to pay us, give us an apartment, and a travel allowance. We took the job.”

12 Students to Change the Nation

The class, Foundations of American Political Thought was not a big splash.

“We only had 12 students our first semester,” said Susan Burtness, “but we thought ‘you can make big changes with 12 people’ so we dove into it.”

“We candidly told our students that the original source of American political thought was The Bible,” Bill Burtness said.

“I said outright that we’d be studying The Bible to understand what it said about self-governance, avoiding tyranny, and anarchy, and sustaining personal and national liberty throughout generations.

“I wasn’t talking about religion, I was talking the philosophy of government. I told them, ‘if you don’t want to study The Bible, this class isn’t for you.’”

Those 12 students stayed on and made big changes to the class.

“They brought in their friends and the next semester there were 25 students,” Bill Burtness said.

“Word of mouth brought in 60 students the next semester. Then 110. Then 300 students. Soon, my wife was standing at the doors, holding them shut, while people banged on them, demanding to be let in. The biblical foundations of American Political Thought class was a great success.”

But the promise of payment went unfulfilled, along with the apartment to live in and the travel allowance.

“The university was strapped for cash and they just didn’t have the money,” Bill Burtness said.

“But since our Amsterdam days, so long ago, we were used to going forward with less to do more.

Volunteering has always been in our hearts and here was an opportunity to help shape a nation with its future leaders, to sustain liberty and freedom where they had known precious little.”

“These young students looked to us for direction. They were so eager to learn. They were sweet people, wanting to know how they should then live. We  just couldn’t say ‘No’ to them. “