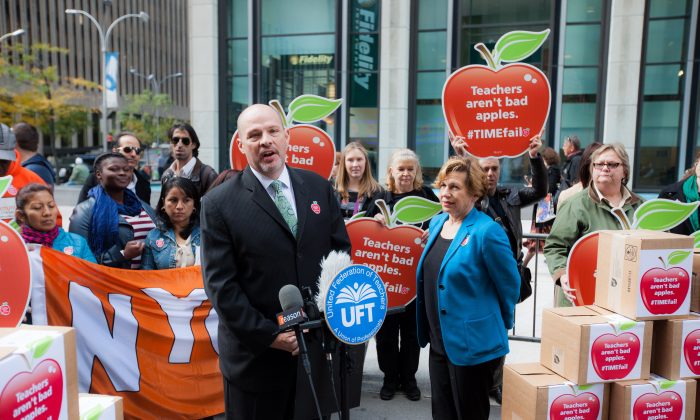 United Federation of Teachers President Michael Mulgrew at a press conference in front of Time magazine headquarters in mid-town Manhattan, New York, on Oct. 30, 2014. She presented a petition with over 100,000 signatories asking the magazine for an apology for a cover they say generalizes teachers as bad. (Petr Svab/Epoch Times)
New York

NEW YORK—If there’s something news publications have learned since their earliest days, it is that controversy sells oh-so-easily. That is, if one doesn’t step on the toes of a behemoth in the process.

That may end up being the lesson for Time magazine, whose cover last week sported a gavel suspended above an apple symbolizing millionaires using lawsuits to go after “bad teachers” protected by tenure.

Yet, what started as a witty way to spark a debate now threatens the economic interests of the publication.

Within a week of publication, teachers unions handed over 100,000-signature online petition and comments asking Time to apologize for the cover, saying it generalizes all teachers as bad.

“We got rid of the mayor who continued to do that,” Capers said, referring to tough-on-unions Michael Bloomberg. “And we’ll get rid of the magazine too.”

However futile Caper’s threat may sound to a magazine with millions of subscribers, the campaign may have a real monetary impact.

Over 11,000 of the petitioners were Time subscribers and over 64,000 acknowledged using the magazine in their schools.

At least two teachers present at the press conference said they would cancel their Time subscriptions and many more are announcing the same, as suggested by Twitter posts under “#TIMEfail” hash-tag.

It is not quite clear though how far the sentiment has spread through the AFT’s almost 900,000 membership or through the public in general.

Time weathered the economic downturn after 2008 relatively well, keeping a stable subscription base. But losing the public schools market may hurt.

Copies of Time used to reach 20 million people worldwide. But, just as many other print media, the publication continues to suffer a decline in circulation, currently holding at under 3.3 million worldwide.

What’s the Fuss About

The controversial Time cover was related to a story exploring Silicon Valley millionaire David Welch’s fight against union-negotiated job protections that, as he believes, make it so hard to fire teachers that the “bad apples” continue to rot classroom after classroom of students, thus hurting their constitutional right for quality education.

But the unions don’t object to the article. “The article was, by and large, balanced,” said AFT president Randi Weingarten. The cover, however, she called a “misleading and hyperbolical way of unfairly, grossly unfairly characterizing teachers.”

The unions haven’t received a direct response from Time, but the magazine’s Managing Editor Nancy Gibbs responded Thursday on Time’s website. She referred to the publication’s mission to “spur discussion of important issues,” while noting “TIME has nothing but admiration for America’s dedicated teachers and their commitment to excellence.”