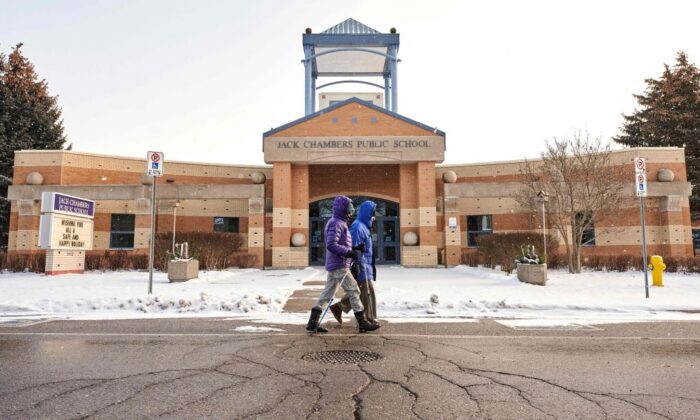 People walk past a school in London, Ont. on Jan. 6, 2022 , the day after the province of Ontario transitioned to online learning in the face of the fast spreading Omicron. (Geoff Robins/AFP via Getty Images)
Canada

Teachers’ Unions Are Undermining Their Own Long-Term Viability

Finally, schools across Canada are starting to reopen. Most provinces had switched to remote learning at the beginning of January to assess the impact of the Omicron variant. But now, thankfully, these remote learning sessions are coming to an end.

Students in British Columbia and Alberta were back in class on Jan. 10. Meanwhile, Manitoba and Ontario plan to reopen their schools on Jan. 17. Given this trend, it looks likely that all Canadian students who want to be back in class will be able to return soon.

Unfortunately, some teachers’ unions have been less than helpful when it comes to getting students back to school. Instead, they have pushed the narrative that schools are “unsafe” and that it is better for students to learn remotely.

For example, at the beginning of January, the Elementary Teachers’ Federation of Ontario (ETFO) called for a delay to the restart of in-person learning. Some of the safety measures they wanted in place included N95 masks for all students and teachers, mandatory vaccinations for everyone who works in or attends a school, and an expanded paid sick leave program.

However, these demands are unreasonable. Not only are N95 masks costly, but they are also difficult to acquire in bulk, and hard for students to use effectively. Mandatory vaccines to attend school would be highly dubious since this would deny an education to many students because of a medical decision made by their parents. As for expanding sick leave, it is well-known that teachers already have generous sick leave benefits.

The ETFO is far from the only teachers’ union to make such unreasonable demands. Earlier this month, the Manitoba Teachers’ Society (MTS) publicly demanded that all schools be moved into remote learning for the entire month of January. MTS wanted only the children of “essential” workers to attend in-person classes and for everyone else to stay home.

What teachers’ unions fail to realize is that by demanding that schools be closed, they are undermining their own long-term viability. Right now, teachers’ unions across Canada are in the enviable position of having a monopoly over public schooling. In every province, membership in the teachers’ union is either automatic or compulsory for all public school teachers (except those employed by charter schools in Alberta).

Many parents are fed up with ongoing school closures. Nowhere has this been more evident than in Ontario, where students have spent more time out of class than any other jurisdiction in North America. By consistently advocating for school closures, teachers’ unions have put themselves offside with the many parents who depend on a reliable and effective public school system for their children.

If parents cannot rely on public schools, they will remove their kids and place them in private schools or even homeschool them. Once this becomes a trend, it will pick up steam. If school boards shrink in enrolment, they will have no choice to reduce the number of teachers that they employ. This will impact the bottom line of teachers’ unions in a big way.

In addition, it makes little sense for provinces to continue giving teachers’ unions a monopoly if these unions are making it impossible for schools to function. If even one province decided to disrupt the status quo and allow teachers to opt out of paying union dues, or if a province decided to provide more funding to independent schools, this could become a trend across the country. After all, many grassroots teachers want to get back into the classroom and they aren’t particularly happy with their unions advocating for school closures.

Teachers’ unions might be in a secure position now, but they had better be careful not to disrupt the education system too much. They could find themselves on the outside looking in, and wondering what happened to their comfortable monopolies.