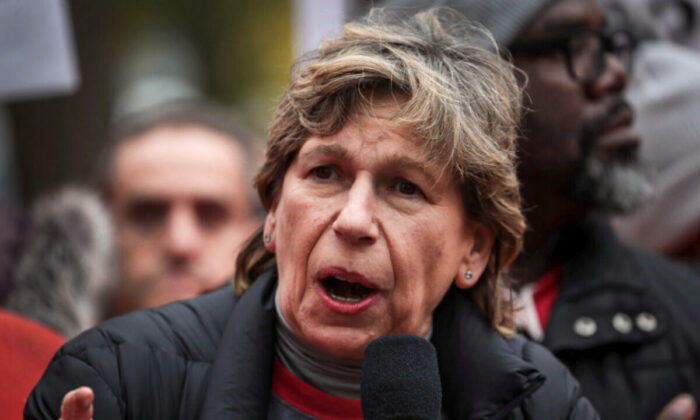 The second-largest teachers union in the United States will make available to millions of public school students a “news media literacy” tool that critics say has a significant left-wing bias.

In a partnership announced this week, the American Federation of Teachers (AFT) said it will purchase licensed copies of NewsGuard’s “anti-misinformation” browser extension for the union’s 1.7 million members, who will then be able to share it with the tens of millions of students they serve.

“For years, educators have fought battles against suspect sourcing, with their students often misled by dubious outlets and spam sites posing as ‘news,'” the AFT said in a statement. “NewsGuard offers a practical solution, alerting students and educators to those sites while also providing a valuable lesson in media literacy.”

NewsGuard says it employs a team of “trained journalists and experienced editors” to review and rate each site based on nine criteria of journalistic practice, such as whether the site repeatedly publishes false content, whether it regularly corrects or clarifies errors, whether it avoids deceptive headlines, and whether it discloses who owns and is financing the website.

The NewsGuard tool awards weighted points for each criterion to produce an overall score on a scale of zero to 100. A score of less than 60 earns a “Red” rating, while a score of 60 and above earns a “Green” rating.

A recent study by conservative media watchdog Media Research Center (MRC), however, suggests that NewsGuard has an “extraordinary” political bias that makes left-wing news outlets more likely to get a better rating.

The MRC noted that Jacobin, a magazine that styles itself as the “leading voice of the American left” and champions ideas such as the nationalization of supermarkets, receives a score of 92.5 by NewsGuard. The Nation, a magazine that defends the looting and vandalism committed during the widespread riots in the summer of 2020, also has a 92.5 NewsGuard score. The Atlantic even secures a perfect 100, despite its dubious report claiming that President Donald Trump disparaged members of the U.S. military who were killed in action as “losers” and “suckers,” the authenticity of which many have doubted, and which Trump has denied.

Meanwhile, NewsGuard gives The Federalist an abysmal score of 12.5, which, according to MRC, has a lot to do with the conservative magazine’s questioning of the efficacy of COVID-19 mask mandates.

MRC President Brent Bozell spoke against the AFT-NewsGuard partnership, calling it a “disingenuous new way” for the left to indoctrinate children without their parents’ knowledge.

“This is as bad as CRT (critical race theory). In fact, it’s worse,” Bozell said. “Like CRT, it is designed to push a leftist ideology on children, but unlike CRT, the left is not going to give it a name this time. This is purposely designed to go under the radar of public scrutiny.”

The partnership with AFT marks the latest move by NewsGuard to expand its scale of services. Last year, the New York-based company introduced HealthGuard, a product aimed to help patients and health care workers “identify trustworthy sources of health news” while browsing the web, and warn them when they “encounter links to sites with unreliable health or medical information.”

In May 2020, NewsGuard signed a deal with Microsoft, allowing all users of the company’s Edge desktop and mobile browser to access NewsGuard’s website ratings for free. Microsoft has already integrated NewsGuard’s ratings into Microsoft Edge Mobile.