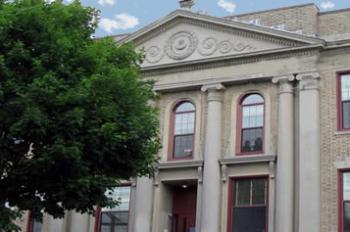 Print
In an agreement signed Monday by the head of the teachers union and the superintendent of Central Falls High School in Rhode Island, all the schools teachers that were fired as part of the transformation protocol for the failing school, will have their jobs back. Only the school’s principal will be replaced.

As part of the agreement all teachers will be required to participate in a rescreening process to evaluate where they are in need of professional development.

The signing ends months of tense negotiations that garnered national attention when the Central Falls’ school board announced in February that it would fire all the high school’s faculty and staff at the end of the year.

District Superintendent Dr. Frances Gallo said the firing, “wasn’t a lame threat, it wasn’t a threat at all. It was the following of a protocol.”

Federal guidelines mandated a transformation plan for the chronically troubled school. Central Falls was one of the state’s lowest performing schools with a 48 percent graduation rate last year.

The Central Falls Teachers Union (CFTU) said it wanted to negotiate when the district proposed reform measures. The district responded by announcing the layoffs.

The terms were finally agreed to by CFTU and the school district is essentially the same as what the district originally proposed.

Sessums said she was “very, very pleased” with the agreement, according to a report by the Boston Globe.

Next year the Central Falls school day will be extended by 25 minutes, teachers will be required to spend one hour a week tutoring students as well as eat lunch with students once a week.

A federal school improvement grant will pay teachers a $3,000 stipend for weekly 90-minute development meetings where they can review student work and improve their collaboration and practices. Teachers will also participate in up to two weeks of professional training every summer, receiving $30 an hour for their time.

Other reforms include changing to criteria-based staffing. The school administration will have sole authority to make teacher assignments and to readjust school schedule, with input from teacher representatives.

The agreement also stipulates that CFTU will stop any legal actions against the district but can continue collective bargaining over employment issues.

In a statement on the Central Falls website Gallo writes that the success of the school requires “teamwork coupled with an unwavering focus on improving the intellectual, social, and emotional well-being of every child in every classroom.”

The move to fire the teachers was lauded by President Obama in a March 1 speech addressing education reform. Obama said that the school was “chronically troubled” citing that only 7 percent of 11th graders passed the state math tests.

“If a school continues to fail its students year after year after year, if it doesn't show signs of improvement, then there's got to be a sense of accountability,'' the president said. “As my education secretary, Arne Duncan, says, our kids get only one chance at an education, and we need to get it right,'' he added.

Education commissioner for Rhode Island Deborah Gist said the changes are, “Just exactly the kind of reforms that we know are necessary to in order to make the dramatic improvements necessary at the high school.”