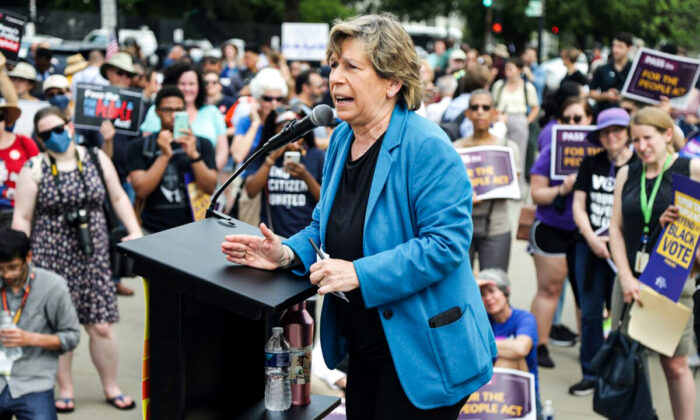 Randi Weingarten, president of the American Federation of Teachers, speaks during a rally in front of the U.S. Supreme Court in Washington on June 9, 2021. (Alex Wong/Getty Images)
Critical Race Theory

American Federation of Teachers (AFT) president Randi Weingarten has weighed in against the idea of arming teachers, arguing that if teachers can’t dictate what children learn at school, they can’t be entrusted with guns, either.

Weingarten spoke on Jun. 11 at the March for Our Lives rally in Washington, an event organized by a group of survivors of the 2018 attack at Stoneman Douglas High School in Parkland, Florida. She was among a slate of speakers advocating for tighter gun laws, which they claim would prevent tragedies such as those in Parkland and more recently, Uvalde, Texas.

During her speech, Weingarten pointed to two ideas that recently gained a lot of attention. One is that teachers who wish to carry guns at school should be able to do so. The other is that parents should be able to review books going into school libraries and take out the ones they deem inappropriate.

Weingarten argued that these ideas contradict each other.

“Teachers want to be teaching, not holstering firearms. We need fewer guns in schools, not more of them,” she told the audience, saying that schools need to be armed with books, “not bulletproof vests.”

Weingarten has been pushing back against legislative efforts aimed at giving parents the ability to review and potentially object to curricula and teaching materials being taught to their children at school. These efforts, commonly called curriculum transparency bills, are largely a response to the increasing awareness among parents of the leftist race and gender ideologies being injected into public education.

In April, the union boss denied the notion that some public school teachers are indoctrinating children with leftist views on issues like race and gender. She dismissed those who say otherwise as spreaders of “propaganda” and “misinformation.”

That being said, the AFT has a record of defending The New York Times’ controversial 1619 Project, the historical accuracy of which has been repeatedly criticized by historians and leading scholars in the field of U.S. history, including fact-checkers hired by the NY Times. The union also invited Ibram X. Kendi to speak at its biennial summit last July, during which the prominent critical race theory advocate told the audience that denying being racist means that the person is racist.

The nation’s two largest teachers’ unions, the AFT and National Education Association (NEA), now side with congressional Democrats who are preparing to advance their new gun control package.

Both Weingarten and NEA president Becky Pringle testified in favor of gun control measures in a Jun. 8 hearing before the House Oversight Committee. Pringle also spoke at the Jun. 11 March For Our Lives rally against what she called “gun violence.”

“We cannot ask educators, who enter this profession to help children soar, to carry weapons and wear body armor while teaching addition or the Pythagorean Theorem,” Pringle said in a press release, claiming that “it’s already too late” by the time the armed attacker shows up at school.