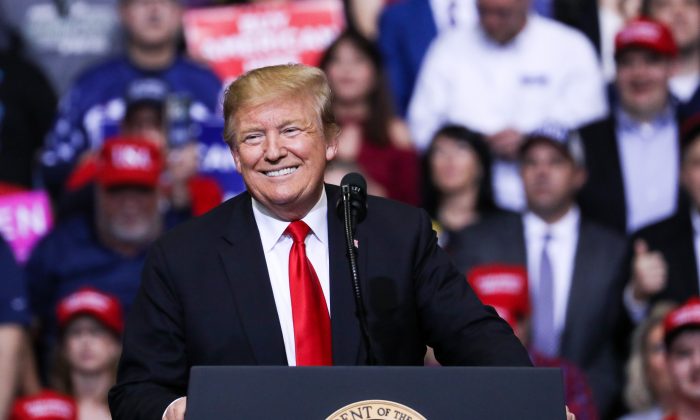 Officials and parents in Houston, Texas, expressed outrage at a school assignment given to seventh-grade students at a local public school which included a passage titled “Trump Against American Values.”

Texas State Rep. Briscoe Cain (R) posted a photo of the assignment on Facebook along with a note from an angry parent. The passage in the assignment comes from a student-written essay and features statements like “some of Trump’s policies have gone against American value” and accuses President Donald Trump of making “racist remarks” and calls on the American people to “take a stand” against the commander-in-chief.

“This individual has violated the sacred trust that every parent has with the State of Texas when they send their child into a public school,” Cain wrote. “They have lost the privilege of being in a classroom with Texas children, and forfeit the title of teacher.”

“No teacher should attempt to indoctrinate a child to their ideology, no matter who is in the White House.”

According to the Houston Chronicle, the assignment included a series of 10 student-written essays with questions asking what can be inferred from the essay.

The multiple-choice answers included options like “Donald Trump should not be president” and “America’s future is in danger” and “the United States will impeach Donald Trump.”

Chris Felder, the concerned parent who contact Cain, called his daughter’s assignment “very out of place to say the least.”

This type of non-factual rhetoric has no place in our schools regardless of who the president is,” Felder wrote. “My children have experienced great teachers in the classroom, but have also had to put up with those who see their role as indoctrinators, not educators.”

“As a fellow graduate of Goose Creek ISD, I’m embarrassed that this is what our district tolerates.”

According to Cain, the local school district’s superintendent, Randal O’Brien, had taken action to correct the situation.

“It is our understanding that he and his administration have done all that state law allows them to do at this time,” Cain said.

The school district received a number of calls, some of which included death threats after the controversial assignment was circulated online. The district pointed out that the matter was addressed before it received widespread attention.

“We received many calls at the district following the issue of a media release and social media post that told part of the story and did not reflect the fact that the matter had been resolved within the district,” the district stated.

“Many of those calls were deeply disturbing and threatening in nature,” the district added. “While we all agree that the particular passage should not have been used, the teacher made a simple error in judgment. Like all of us, teachers are human and make mistakes from time to time.”

Cain issued a response to the school’s statement when the Chronicle provided the statement to him.

“I am glad that we had the opportunity to bring this situation to light and encourage civil discourse on this incident,” Cain said in the statement. “I’m also grateful to O’Brien and the district for the actions they took before my office brought this issue to light.

“I know Superintendent O’Brien personally and have seen first-hand how much he cares for students and high ethical standards in education.

“Some view this incident as a simple mistake, others see it as a betrayal of parents and students. Sunlight is the best remedy to inappropriate behavior in the classroom. The importance of Texans being made aware of such actions is to ensure public accountability to indoctrination in the classroom.”