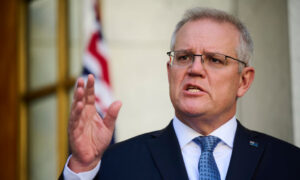 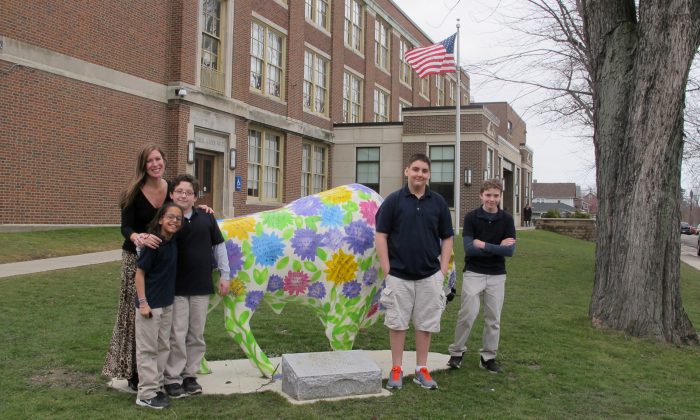 Teacher Kelly Gasior (L) and students stand with a statue of a Buffalo that's been emblazoned with anti-bullying messages outside Lorraine Academy, Public School No. 72, in Buffalo, N.Y. Educators in Buffalo and elsewhere worry the name-calling, mocking and social media attacks that have gotten applause in the presidential campaign could undermine schools' bullying prevention policies that call for kindness and respect. (AP Photo/Carolyn Thompson)
US

BUFFALO, N.Y.—Ryan Lysek rose to become vice president of his fifth-grade class at Lorraine Academy in Buffalo, New York, after the sitting veep got bounced for saying things that went against the school’s anti-bullying rules. So the 10-year-old is a little puzzled that candidates running to lead the entire country can get away with name-calling and foul language.

The nasty personal tweets and sound bites of the 2016 Republican presidential campaign are reverberating in classrooms, running counter to the anti-bullying policies that have emerged in recent years amid several high-profile suicides.

For teacher David Arenstam’s high school class in Saco, Maine, the campaign has been one long civics lesson: “Can you really ban a whole group of people from coming into the country?” the students will ask, or “What’s the KKK, and do they still really exist?”

But mostly, Arenstam said, when it comes to Republican Donald Trump, students “can’t believe nobody calls him on the carpet the way that they would be called on the carpet if they said those things.”

There’s Donald Trump calling Ted Cruz a “loser” and a “liar” and singling out Muslims and Mexicans for criticism. And there’s Marco Rubio mocking Trump’s “worst spray tan in America” and calling him a “con artist.”

If students are following this election—and they should be—we have a lot of re-educating to do.
— Will Keresztes, Buffalo school administrator

Cruz says nearly every day on the campaign trail, “I don’t respond to insults” and he has been careful not to engage when Trump and others call him names. But during the Jan. 28 Republican debate which Trump didn’t attend, it was Cruz who made some quasi-insults he said Trump would have lobbed: “Let me say I’m a maniac and everyone on this stage is stupid, fat and ugly,” Cruz said, snickering that he was getting “the Donald Trump portion out of the way.”

On Thursday, Mitt Romney, the 2012 GOP presidential nominee, jumped into the fray, branding him “a phony, a fraud.”

“Imagine your children and your grandchildren acting the way he does,” Romney said. “Would you welcome that?”

In the battle for the Democratic presidential nomination, Hillary Clinton and Bernie Sanders have focused more on policy than on each other. The Republican race is a different story.

“If students are following this election—and they should be—we have a lot of re-educating to do,” Buffalo school administrator Will Keresztes said. Much of the rhetoric would violate not only the district’s code of conduct, he said, but the state’s Dignity for all Students Act.

The conflict landed on Sioux City, Iowa, Superintendent Paul Gausman’s doorstep after Trump decided to hold a campaign rally in a school building. The move sparked a protest from some students — who cited their own anti-bullying rules in trying to stop it.

“He makes people at his events think that saying the kinds of things he does to other people is OK. It’s not OK,” protest organizer Ismael Valadez of neighboring South Sioux City, Nebraska, said at the time.

In the end, it was the idea of free speech, the right to assemble and policies against discriminating based on something someone said or did that prevailed, Gausman said this week.

“I was very proud of our students for the way they engaged in the political process in a respectful manner, and I think they made their point,” said the superintendent, whose district was featured in the 2012 documentary “Bully.”

This is not the first campaign to get ugly, but educators, parents and students say this one is particularly challenging because often the biggest applause lines and headline-grabbers fly in the face of appeals for students be respectful and kind.

8 Easy Ways to Teach Your Children to Write