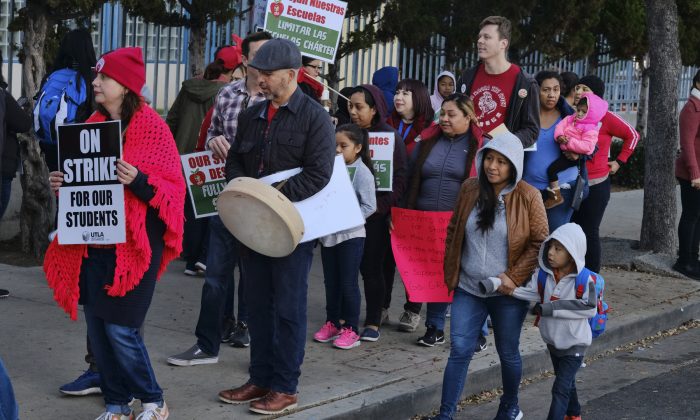 Parents arrive with their children to Evelyn Thurman Gratts Elementary School as people rally in support of a teacher strike in Los Angeles on Jan. 22, 2019. (Richard Vogel/AP)
Southern California

During the January teachers’ strike in Los Angeles, unions dedicated a great deal of attention to charter schools, with some even accusing officials of hurting public schools.

At the time, Alex Caputo-Pearl, the president of the United Teachers Los Angeles (UTLA) union, told a cheering crowd of striking educators that the district was “[starving] our schools in order to justify cuts and justify handing more schools over to privately run charter schools.”

In early June, the task force, which included representatives from both unions and charter schools, released its report, recommending stricter limitations on privately-run public charters. To many observers, this was an unsurprising conclusion, as charters often aren’t unionized at all.

With the rapid growth of the charter school movement in the state, unions are losing many dues-paying members. California’s union membership as a whole dropped by 86,000 last year, “the most dramatic decline in the nation,” according to a California Policy Center report. This may have prompted union leaders to push state officials to consider restricting the popular branch of public education.

However, Will Swaim, president of the California Policy Center, an educational non-profit, told The Epoch Times that many teachers who come in contact with the organization no longer see a benefit in remaining unionized.

“A very few [of school teachers] just want to keep the money they now pay in dues,” Swaim said. “But most object to the notion that the unions bring any value to public education.”

“The consistent theme in criticism of the unions is simple: Union leaders are waging a class war against the poor — even as they claim the opposite.”

In the past, Caputo-Pearl accused the district of “writing a blank check to the charter school industry,” but in the 2018-19 fiscal year, California public schools received a total of $97.2 billion in funding. Considering that nine out of every ten K-12 students attend traditional schools, only 11% of the state’s pupils attend charters. So the bulk of tax dollars going to education in the state are going to publicly-run schools.

But this push against charters is seen as part of a political agenda, critics charge. And perhaps, Swaim told The Epoch Times, teachers are increasingly leaving unions precisely because of their push for more political control.

Many school teachers, Swaim said, “object to the unions’ extracurricular activities — its support of issues that don’t strictly deal with education, its contributions to national politics.”

“To educators worried about students,” he added, these activities are “at odds with their own sense of [students’] real need.”

Local unions such as the California Teachers Association have long claimed the opposite, saying that charter school teachers are unionizing in droves because of an “increasing concern that recent trends in the charter school industry are limiting educator input into important decisions while contributing to high teacher turnover.” Worse yet, the CTA writes in its website, charter school teachers suffer due to the “high cost of living and low pay.”

While there are many charter school teachers who have, indeed, sought unions, “many object to the tenure system that produces last in, first out layoffs, and sends the least experienced (and the least effective) teachers into the toughest communities.” Furthermore, he said, teachers are noticing higher quality and better opportunities outside the unionized system.

“Teachers point out that they make precisely the same amount as other [public school] teachers — despite remarkable differences in effectiveness. Far from supporting them in the quest to do well by doing good, these teachers note that the union system punishes the good in order to reward the less qualified.”

The former educator, union member, and school committee member admits that both settings “are home to some excellent teachers who have high expectations for kids and work incredibly hard,” but when it comes to heavily unionized systems, she said, schools “[are] much more likely to hold on to and protect weak teachers, even at the expense of less senior but much better ones.”

“I did have one experience in a district school that was unionized where seniority did not determine layoffs but in every other case I’ve seen over two decades, seniority has been the sole driver and that is never good for students.”

For parents like herself, she told The Epoch Times, unionized schools are also less productive.

“In my experience,” she said, “teachers are absent much more often in the unionized schools, parent-teacher conferences are less frequent, and communication with parents is not as good.”

“On balance, I think teachers’ unions are a huge impediment to getting the best teachers in front of the students who need them most, as their commitment to protecting adults at any cost is often in direct conflict with what is best for students, and I’ve seen it play out too many times to be convinced otherwise.”