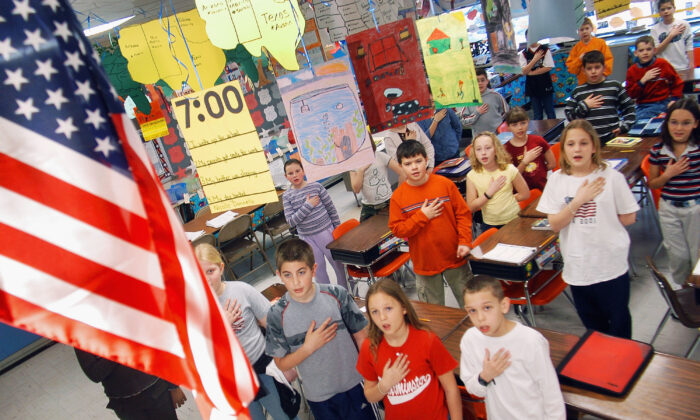 In this file image, fourth graders pledge allegiance to the flag in a Pennsylvania elementary school on March 24, 2004. (William Thomas Cain/Getty Images)
US News

A New Jersey middle-school teacher has been assigned duties specifically to avoid being present during morning announcements after complaints were made about her regularly kneeling during the Pledge of Allegiance.

The decision was painted by authorities as a compromise to avoid a clash of rights, according to the Vineland Daily Journal.

Concerns about a female teacher—who is not named—taking a knee during the Pledge of Allegiance were first raised on Oct. 2 during a school board meeting in Vineland, New Jersey.

“That type of behavior offends me,” Randy London, told the board, explaining that he was a 20-year veteran as he asked for clarity on the district’s policy.

“I’ve risked my life hundreds of times to save people that I didn’t know,” he said during the meeting, which was recorded by the Vineland Public Schools board and uploaded to YouTube.

After London stepped down, retired police officer Ron Maccri stepped up to the podium, describing the taking of the knee in front of 11-year-olds as “indoctrination.”

“What this woman is doing would be bad in any school, but because it’s in the (Sgt.) Dominick Pilla School—who gave his life for our military—it’s reprehensible.”

“Parenting happens in the home, not in schools. They are there to educate. I respect them for what they do. Just educate, that’s all—that’s your job.”

But despite his determination to get the matter dealt with, Maccri did not demand any disciplinary action.

And stop it has.

After some head-scratching over apparently conflicting rights between teacher and pupils, the school board said on Oct. 8 that it had found a compromise.

The principal had “reassigned homeroom oversight so the teacher would have alternate duties during opening announcements,” a member of the school board told the Journal.

“Like all principals, Mr. Bermudez has the authority to utilize his building staff as appropriate,” Joseph Rossi, the district’s executive director personnel, told the Journal. “The district and the teacher agree that this is a reasonable solution for all parties.”

The teacher “has not indicated anything ‘political’ about her views.” he had told the Journal earlier.

The board had reached out to the state board of education for advice, after failing to agree on whether the actions were a violation of policy.

Board vice president Tom Ulrich had responded during the meeting in support of those who raised the issue.

Teachers “should not be imparting their own personal views—political, religious, anything, upon a student,” Ulrich said. “If they don’t want to salute the flag and stand up and not pledge the Pledge of Allegiance, that’s one thing.”

“But I think to impart their views on impressionable young children, is also, I’ll use your term, reprehensible,” Ulrich said. “It sets a bad tone.”

But the Union president has said that it wasn’t so clear cut, according to the Journal. “It would be one thing if she was proselytizing to kids that you can’t stand, or you shouldn’t stand for this reason, but she’s not doing that.”

“Students do not have to stand, you can’t force students to stand, we cannot make students leave the room if they refuse,” Russo said. “It would be weird to think that the students in this situation have different or more rights than the employee.”

The school board policy states (pdf): “The Board of Education recognizes and encourages the right of all citizens, including teaching staff members, to engage in political activity. The Board prohibits the use of school premises and school time, however, for partisan political purposes.”