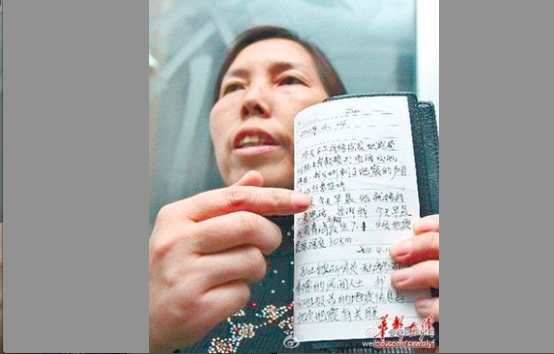 Ms. Xiao Hongyun of Changde in Hunan Province, China holds the diary in which she lists times that she has predicted earthquakes on the basis of physical reactions she suffers. Most recently, she predicted the April 20 earthquake in Ya'an in Sichuan Province, China. (Weibo)
China

Teacher in China Feels Earthquakes Before They Happen

Ms. Xiao Hongyun, a teacher at Changde Normal School in Hunan Province, usually suffers dizziness, tinnitus, and palpitations the day before an earthquake occurs. She has suffered these symptoms in conjunction with earthquakes in China as well as in Taiwan and Chile.

She recently experienced dizziness and insomnia a few days before the 7-magnitude earthquake in Ya’an in Sichuan Province, China on April 20.

Voice of China interviewed Ms. Xiao about her physical prediction of the Ya’an earthquake.

According to Ms. Xiao, she suddenly fainted while giving a lesson. She was sent to the hospital and examined, but no abnormalities were found.

Xiao said, “I began to feel dizzy on the 18th and I could not fall asleep during the night, especially on the 20th, I was still awake at 4 a.m., feeling very tired as if I were in a boat swaying on the water.”

She said to her husband, “I’m afraid a quake is about to happen somewhere.” The Ya’an earthquake did then happen on the morning of April 20th. “I was sitting on the sofa and my legs could not stop shivering when the quake took place,” said Xiao.

Ms. Xiao, age 53, says her physical episodes date from an electric shock she suffered at the age of 13. “At that moment, my whole body went numb and I collapsed on the ground. Luckily I was not hurt badly,” she said. Since then, she has experienced the dizziness and other symptoms from time to time, yet medical examinations have always been normal.

Ms. Xiao recalls that when she was 16 years old, one day she heard a roar in the field while harvesting rice crops, but people next to her didn’t hear anything. Many days later, she learned that the Tangshan earthquake had happened on that same day. (On July 26, 1976 the Tangshan earthquake struck in northeast China, killing hundreds of thousands of people.)

However, Ms. Xiao did not associate her abnormal physical symptoms with earthquakes until September 1999. “When I saw on TV the strong quake in Taiwan on September 21, 1999, I began to think, maybe my strange illness is related to earthquakes.” Xiao said, because she had suffered strong physical reactions the day before.

Since then, Ms. Xiao watches the news every time she feels unusual. “After my physical reaction, most likely there will be an earthquake. Based on the degree of the ringing in my ears, I can judge how far, how strong, and in what direction approximately a quake will be,” she said

Because nobody believed her and thought something was wrong with her, Xiao started recording every premonition that had been verified by an earthquake. She asked her family and colleagues to sign the pages as confirmation. According to her diary, the closest earthquake occurred in Linli County of Chengdu and the farthest occurred in Chile.

Ms. Xiao contacted Sun Shihong, a retired professor of the Chinese Seismograph Station, the day before the Yushu earthquake of April 14, 2010. She told him she had a strong physical reaction and that this usually happened the day before an earthquake.

Subsequently, experts from various seismic stations throughout Hunan Province made a special trip to Ms. Xiao’s home to conduct an investigation and analysis.

The experts concluded that Xiao’s reactions were indeed linked to the earthquakes because her body could sense the infrasonic sound of the earthquake in advance. The higher the magnitude is, the stronger the sensation is.

Translation by Alex Wu. Written in English by Arleen Richards.